WOMEN should be entitled to half of their boyfriend’s disgusting pile of
crap in the event of a split, according to a landmark ruling.

Under existing law, when a girlfriend moves out at the end of a relationship, the man retains full ownership of the mound of unwashed clothes, empty Pot Noodle containers and deeply suspicious paper hankies.

However, judge Denys Finch-Hatton said the male partner should be legally obliged to divide all of his shitty, floor-based assets.

He added: “As it stands, the female takes all of the nice things, like pictures, good quality furniture and art house DVDs, because she obviously bought them.

“The man meanwhile is left with nothing but the detritus of his own wretched life. As well as soiled clothes, this will typically include some other clothes that are clean but smell bad from having been left in the washing machine overnight, a Ned’s Atomic Dustbin picture disc and an air pistol.

“This should be distributed evenly between the two parties, if only out of spite.”

Roy Hobbs, who recently split from his girlfriend, said: “After Susan moved out I’ve mostly been living in the lounge, in a gorilla-style nest made of old towels.

“It’s times like this when you realise that you haven’t really bought anything worthwhile since 1996 and that kitchen-wise all you have is a fork. I sort of hate myself.

“Now if you’ll excuse me, I’m going to make a bowl of muesli for my dinner.” 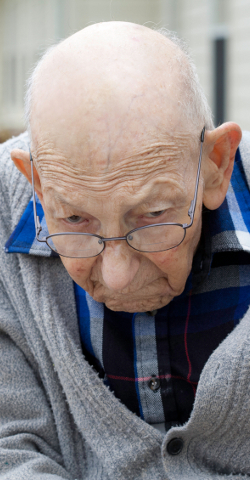 BRITAIN is the angry, racist, old widower who lives in that decrepit house at the end of the street, the UN has confirmed.

With most BBC programmes now comfortably xenophobic and a new survey suggesting Britain is the most anti-immigrant country in Europe, international observers have warned their children not to let their ball go into our garden.

A UN spokesman told his nine year-old son: “Britain will keep the ball while it lectures you on how important it used to be and how this street used to be filled with nice ‘clean’ families.

“It will probably look you up and down and ask if you’re ‘one of them fuckin’ Afghans’ before making a pitiful attempt to imitate your accent.”

He added: “You will notice the garden is a disgusting mess – do not touch anything. There will also be an appalling smell coming from the blocked drain that still isn’t fixed.

“Everything inside the house is about 50 years out of date, there will be some old milk bottles filled with urine and the front room will be strewn with cuttings from newspapers that are clearly written by mental patients and children.

“And make sure you don’t stand too close. It stinks of cheap wine and food that’s made from dog excrement wrapped in a cheese and ham pancake.

“On second thoughts I’ll just buy you another ball.”

The UN is now set to pass a resolution calling for Britain to be left alone as it is just a sad, disappointed, lonely old country who was not about to change its ways.

The resolution also stresses that Britain will be dead soon anyway and that someone will no doubt phone the police when the stench becomes unbearable.