THE history of Western civilisation is expected to come full circle today when Greece brings it crashing to the ground.

With most European and American banks now filled to bursting with worthless pieces of paper handed out willy-nilly by the Greek ‘government’, experts say the world of science, art and democracy which was born in Athens 2500 years ago and spread its glow across the Western hemisphere is now fucked into a tinker’s bucket.

Professor Henry Brubaker, of the Institute for Studies, said: “Given that it was founded by Greeks, I’m amazed it lasted as long as it did.

He added: “If only we had been inspired by Spaniards. The buildings may not have been so grand – or actually finished – but we’d have afternoons off and be able to maintain a clear conscience while doing unspeakable things to a donkey.

“Beyond that I’m not sure we had much choice. Italian civilisation is based largely on paying protection money to hot-headed olive oil importers, British civilisation is fine as long as you actually prefer it when things don’t work, while German civilisation does have a tendency to get a bit… carried away.

“And French civilisation is of course an oxymoron, much like German humour, Italian ethics, British cuisine and French soap, French decency and French not fucking my wife.”

Professor Brubaker said it was now time to plan for a post-civilisation society, stressing the transition would be much easier for long term viewers of ITV.

Peppa Pig Will Work With Labour But Not Brown 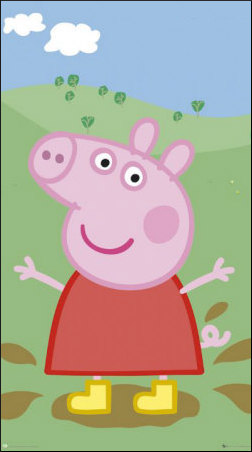 LIBERAL Democrat leader Peppa Pig has insisted she could work with Labour in a hung parliament, but not under Gordon Brown.

Ms Pig withdrew from an election event today after it emerged that Mr Brown would be in the same building, but stressed she had not ruled out a possible deal with David Miliband or Alan Johnson, especially if they like swimming and sticky buns.

The Lib Dem leader has been under steadily increasing pressure to clarify her position after insisting it would be ‘impossible for Gordon Brown to remain in Downing Street if the Labour Party was rubbish at doing politics’.

Both Labour and the Conservatives have condemned the five year-old, with one cabinet minister claiming she had become ‘intoxicated’ with her own publicity and running too fast down a hill.

But opinion polls show her post-debate surge is being sustained as she attracts support from across the spectrum, including Edmond Elephant, Dr Hamster and the Amazing Mr Potato.

Ms Pig said: “I think, if Labour do come third in terms of the number of votes cast, then people would find it inexplicable that Gordon Brown himself could carry on as prime minister. That would be really horrid.

She added: “But basically I’ll work with anyone who can deliver greater fairness, more trips to see granny and grandpa and the replacement of our independent nuclear deterrent with an orange ice lolly. Or a bag of chocolate buttons. No, wait – a pony!”

Tory leader David Cameron accused Pig of holding the country to ransom and stinking of shit, while Gordon Brown sent the Lib Dem leader a hastily scrawled note saying, ‘I am going to kill you and eat you’.