A HAIRCUT turned weird and awkward after a barber and a customer failed to have a discussion about football.

Tom Booker was having his haircut by Wayne Hayes in an encounter which lasted about 10 minutes but felt like six hours.

“Then he pretended to be extra careful about attaching the thing to the clipper thing that makes your hair different lengths, but I could tell he was stalling while thinking of other topics. It was really horrible.”

Hayes said: “This is an empty husk of a man. 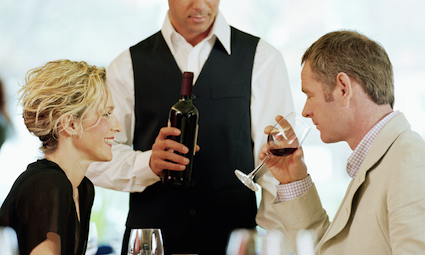 A MAN who was asked to taste the wine in a restaurant has managed to bullshit his way through it with great success.

Martin Bishop, who was on a date with Eleanor Shaw, confirmed he knows as much about wine as most people know about theoretical physics.

Shaw said: “He was really knowledgeable. He swirled the wine around in the glass and sniffed it.

“And then he used a straw to blow bubbles in it, which isn’t something I’ve seen before but apparently it’s how you check the consistency of the texture.”

Bishop said: “The waiter asked if I wanted to taste the wine. I have no idea what that is even for.

“I used to think it was to see if you liked the wine or not, but apparently it’s not that, it’s for something else, and I’ve no idea what. I just know you’re supposed to stare at the wine, drink a tiny amount of it and then say something.

“Blowing the bubbles was improvised and risky. Thank god she’s a bit thick.”