High streets still the best place for a drunken fight

THE government has laid out its vision of a modern high street based around Britain’s love of fighting.

Under sweeping plans to revive the nation’s ailing town centres, high streets will be re-branded as ‘recreational combat areas’.

A government spokesman said: “In these difficult times it’s important to focus on what Britain is passionate about – violence. Clumsy, drunken, flies-down stumbling-about violence with no clear motive or purpose.

“As retail declines, 63% of people who visit town centres do so mainly for a fight and drinking, in that order. So we’ve created a leisure concept around that.”

Recreational combat areas will feature throw-able paving slabs, covered regions for all-weather fighting and full-length reinforced mirrors for those who want to punch their own reflection.

The spokesman added: “Shops will be limited to men’s clothing outlets selling ‘fighting wear’ – slip on shoes, brightly patterned button-down shirts with things like ‘Club Exclusive’ written on them and big chunky rings that lead to interesting facial scars.

“Existing chain bars will be conflated into one massive pub called Punchy Joe’s, with a vague Australian outback theme, that will run the entire length of a high street and have a Jagermeister fountain.

“Best of all we will pay people with distinguishing characteristics, such as jug ears or high-pitched voices, to come into town simply because they make the best targets for an opportunistic kicking.”

The spokesman also paid tribute to the report by ‘retail guru’ Mary Portas insisting she had ‘nailed it’ with her revelations about how out-of-town shopping centres have affected town centre shops.

He added: “It’s almost as if people have been going out of town, and shopping. In centres.

“She also suggested that car boot sales could be an answer. Which they are, if the question is ‘where can I buy some stolen trainers and a VHS copy of that Jaws film with Michael Caine in it?'” 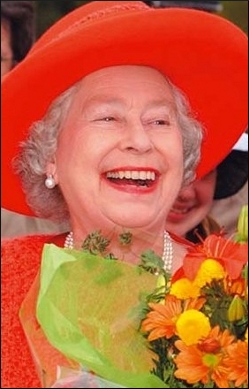 PLANS for the Queen’s Diamond Jubilee will include a speech of unimaginable filth.

Palace officials, keen for the celebrations to capture the mood of the nation, confirmed the monarch will deliver a 12-minute address during which she will use all of the recognised swearwords plus at least three that have been specially commissioned to mark her 60 years on the throne.

A spokesman said: “It will be based mainly on fuck and some finely-crafted fuck derivatives. Her Majesty has also asked the Royal Company of Speechwriters to build a theme around the word ‘cocksucker’.”

The speech will also include a two minute sequence where the backdrop will show images of a range of ‘Great Britons’ from politics, business, the arts, science, sport and entertainment while the Queen labels each of them with a foul-mouthed insult.

The spokesman added: “So you’ll see a 30ft high image of, for example, Sir Richard Branson and the Queen will just say ‘c**t’.”

The Queen will deliver her speech at the jubilee concert at Wembley in what is expected to be the least broadcastable event since Gary Glitter hosted a live episode of Minipops in 1983.

Profane diamond jubilee memorabilia has been commissioned for the event, including a ‘Fuck The Fucking Commonwealth Right up the Fucking Arse’ tea towel and a pair of oven mitts which when placed together will show the Queen and Prince Philip standing side by side by side and the words ‘shit off’.

The jubilee plans also include a series of official holidays for the Royal Family with Prince Charles and Camilla thanking the waiters of Barbados, William and Kate paying tribute to the jumbo prawns of the South Pacific and Prince Andrew getting yet another free lap dance in a gangster’s private whorehouse.

Meanwhile the Palace also unveiled plans for the Queen’s official jubilee transport including a barge made from cushions and a throne-shaped balloon.

And on Jubilee Day her Majesty will be paraded through central London on a space hopper that is strapped to a 14ft high motorised paper-mâché elephant.