HOLOCAUST survivors have backed George Carey’s claim that he is like a victim of the Nazis because he does not like the gays getting married.

Elderly Jewish people agreed that their suffering was the perfect metaphor for the former Archbishop of Canterbury’s brave refusal to mind his own business.

Survivors of Auschwitz and Dachau said that, with the possible exception of drivers who compare traffic wardens to Hitler, George Carey’s remarks could not have been more appropriate or free from self-pity.

Chaim Berkowitz, 88, said: “As a young man, I bore personal witness to the rampages of Kristallnacht. I remember thinking to myself, ‘This is what I imagine being an Anglican in the 21st century will feel like. I must be as brave as them’.”

A spokesman for the Simon Wiesenthal Foundation, added: “If the Holocaust is to have any meaning for future generations then it must be as an easy, go-to point of comparison for people who are being disagreed with.

“George Carey is right. Being criticised because you don’t like two men having bouncy fun is the same as the Final Solution. It’s as plain as the nose on Himmler’s face.

“If anything, the Warsaw ghetto could have done with being slightly worse, just to reinforce the Archbishop’s point.”

The spokesman added: “Much as Jews were forced to wear yellow stars, so the anti-gay Christians will surely be made to wear sew-on patches by the liberal fascists.

“Probably a triangle. But what colour?” 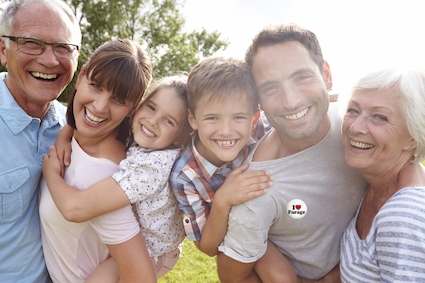 THE average British family is deeply unsettling, according to new research.

The Institute for Studies found a wide range of weirdness, from dads who made no secret of fancying their wife’s sister, to them all being the last five members of the National Front.

Professor Henry Brubaker said: “The average family has two children, a combined income of ￡39,000 a year, a blue Ford Focus and their own private word for butter.

“The weirdness is often trivial, as in the case of the family from Croydon who only fed their labrador fish because they firmly believe that dogs are a type of small bear.

“However, it could also take more worrying forms, such as the family who listed their hobbies as ‘camping’, ‘hill-walking’ and ‘preparing for the war against the machines’.

“The average family are not people you’d want to live next door to. But you do.”

The research also found he average family eats out once a month, with the choice of food usually dictated by some outdated prejudice, like believing Chinese restaurants go to the trouble of catching local cats.