A HOMELESS man has returned a coffee that was given to him by someone exploiting Waitrose’s free drinks offer.

Rough sleeper Tom Booker accepted the coffee from a stranger in good faith, not realising she was abusing the supermarket’s offer of free hot drinks for store card holders.

He said: “It gets pretty cold sleeping in this underpass so I gratefully accepted the take-out cappucino from the nice posh lady.

“I was just about to take a sip when my friend Tony mentioned that she gets them from Waitrose for free and just walks out, which is a clear breach of the core principle of the store’s generous drinks offer.

“Naturally I returned it to my nearest store. Everybody there stared at me, I think admiringly.”

He added: “I have to defend Waitrose because without it there would be nothing for people like me to dream of.” 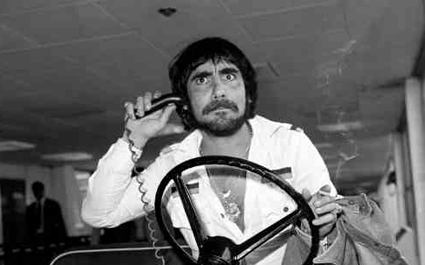 THE last of the renegade Nazis living in a self-sufficient lunar colony has died, aged 95.

Hans Weishaupt passed away in his bed in a geodesic dome on the shores of the Sea of Tranquility, renamed the Meer von Lebensraum.

Historian Denys Finch Hatton said: “Hans was one of the many rocket scientists recruited by NASA to help with their space programme, which they did on condition that they were given half the moon’s surface to colonise for themselves.

“They landed in 1967 – two years before Neil Armstrong, because they wanted to get it all nice and Aryan ready for him – and swiftly established their capital city, Reichsvolk.”

Weishaupt, who kept in touch with world leaders with birthday Skype calls threatening rocket attacks on major cites, died promising that a fourth Reich would rain blood upon the earth.

He leaves behind an army of indestructible robot servants and a 250ft statue of Hitler visible from Mars.