Honk at gridlocked traffic: the twat's guide to panic-buying petrol

THE public has been told not to panic-buy petrol, so of course that’s exactly what it’s doing. Here’s how to purchase fuel like a hoarding twat:

You haven’t moved forwards in ten minutes. Is it because the petrol station is rammed with motorists, or because you haven’t blasted the queue with a lengthy honk of your horn? It made no difference when you did this five minutes ago, but this time it’s sure to work.

Hardly your fault that you’re the 54th person to arrive at a busy garage on an A-road, is it? So you can’t be blamed for stubbornly blocking a major road with your turn signal blinking. That two-mile tailback won’t be your problem until you’re in it.

Pull up to the wrong side of the pump

Finally, after hours of waiting, you’ve reached the pump. Only you’re on the wrong side and the hose won’t stretch over to the tank no matter how hard you yank it. Looks like you’ll have to reverse and get it right. The other cars will happily oblige you in your manoeuvre.

While you’re here you might as well make the most of it by filling up some extra fuel cans. Try to block out distractions like aggressive drivers telling you to ‘buy what you f**king need and f**k the f**k off’ otherwise you might spill some. Onlookers would be understandably cross if you were wasteful like that.

Top up your mostly full-tank

You didn’t strictly need petrol anyway because you had a relatively full tank, but you were beset by paranoia and it would be a shame to miss out on the fun. Pretend it’s taking longer to fill up than it actually is, otherwise the anxious delivery driver behind you might notice.

Shit, you got lost in the excitement of inserting a nozzle into a car and now you’ve put in diesel while you’re unleaded. Better call the RAC which could take ages seeing as the roads are clogged. There’s nowhere to move the car to either, so you’ll have to leave it blocking the pump. Can’t be helped. That bastard honking his horn distracted you.

'Character-building' and other euphemisms for stuff that's shit 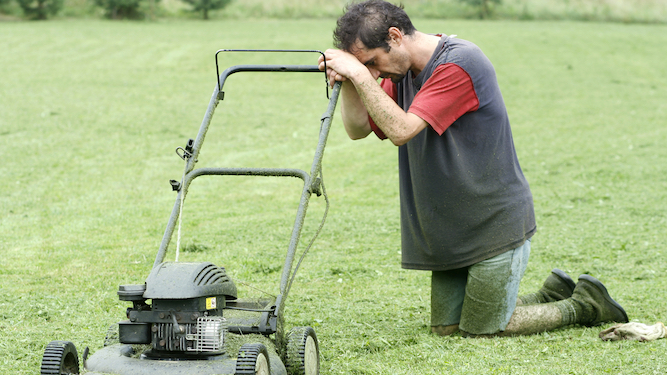 BEEN through an experience that was abjectly shit, but you’re trying to spin it? Here are five useful euphemisms for when you’ve been through the wringer:

Everyone needs a bit more character, don’t they? Formed in response to traumatic events that mean you will never, ever be the same again? Sure, you might have come away scarred for life mentally and physically, but think of the character you’ve gained.

Only losers and cowards turn down challenges. Admittedly, challenges range from ‘slightly more emails’ to ‘build Rome in a day for a manager who will always be angry you’re not doing it fast enough’, but who are you to turn down this opportunity to be taken to the end of your f**king tether?

A rigorous course of antibiotics sounds like exactly what you need to finally shake that wisdom tooth infection. You’ll feel like you’ve gone ten rounds with Oleksandr Usyk but rigor’s better than casual, isn’t it? Except in the phrase ‘rigor mortis’.

No-one goes to a 6am workout in the park for soft graft. No, the gruelling of being screamed at by a wanker in sweatbands who refers to both you and himself as ‘warriors’ means giving your all, and then sleepwalking exhausted through a full day. That’ll be £45, by the way.

If you’ve just been mugged, had a pet put down, lost a receipt for a shirt you hate and changed the sheets when your toddler pissed the bed, you have triumphed over adversity my friend. It’s a hollow victory because you’ll have to do it all again tomorrow, but aren’t you a better person for it?