DO YOU awaken every day with a gnawing feeling of dread and impotent rage about the country going to the dogs, whichever way you voted? Here’s how to cope:

Loads of people are making money out of this, so why not you? Call your condition ‘Branxiety’ and bash out a book about your struggles, do the mid-morning TV rounds and rake in the cash. Make a success of Brexit.

Not only will the endorphins lift your mood but you’ll be nice and fit for when you have to storm parliament because the government ignored your ‘will’ or run away after looting a shop in the no-deal apocalypse, depending how it works out.

Stop talking to other humans

All conversations eventually lead to Brexit, so stop exposing yourself to both outraged remainers and rabid Brexiters. Instead talk to your plants or pets, none of whom will bend your ear about getting conscripted into an EU army.

Become one of those Brexit social media people

It doesn’t matter which side you’re on; obsessively post every tiny development that could be construed as a gain for your side, no matter how unlikely or dodgily-sourced. You’ll be so consumed with your Likes you’ll completely forget what it’s actually about.

Burn your own house down

Sometimes being properly distracted from your problems is all you need to feel better. Gutting your house with fire should provide enough of a diversion to forget about Brexit for a while.

Two grown men high-five each other in public 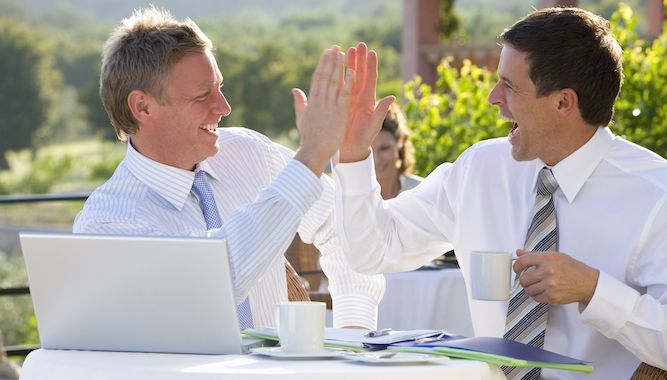 A PAIR of adult men have high-fived each other in a cafe seemingly without either irony of self-consciousness, witnesses have confirmed.

The men, who were seated together drinking coffee, apparently reached a point in their conversation where it became necessary to physically affirm their shared positive feelings about a particular situation.

Helen Archer said: “The one guy put his hand up. I thought he was rudely summoning a waitress but it turned out to be much, much worse.

“He made a ‘don’t leave me hanging’ gesture with his eyes and his friend gave him the full high-five, like two eight-year-olds who’d just pranked a classmate.

“The reverberating cringe around the room, which they were oblivious to, left us all searching for answers. Were they joking? Were they foreign?

“But no, it seemed they were two adult British men who chose to celebrate agreement by performing a gesture already outdated when The A-Team was cancelled. Sickening.”

High-fiver Tom Logan said: “Come on, Steve scored with that girl from the gym. How is that not a high-five moment?”