TOMORROW, and perhaps for years to come, you will be the resident of a country led by a truffle-snuffling entitled toddler. Here’s how to spend the final day without him:

Reminisce about Theresa May

Aw, remember her? Bless, she tried. After three years moaning about what a clueless clusterfuck of a PM Theresa May was, the prospect of Johnson will make you curiously nostalgic for her weak pretence of morals and principles. She was our Mary Poppins really, wasn’t she?

Under a no-deal Brexit Britain, unable to control its borders and desperate for cash, will be awash with illegal drugs. Get in early and whether you choose ketamine, MDMA or the new wave of American opiates being constantly off your face will make Boris more bearable.

You’ve got 24 hours, so it’s got to be worth desperately tracing your genealogy again, just in case you’ve missed an obscure great-grandparent who can get you a foreign passport and an escape from this nightmare.

Read up on history

Educating yourself on this scepter’d isle’s long history will comfort you with the reminder that we’ve suffered through dreadful prime ministers at times of national crisis many times before, and we’ve survived. Though that was before everyone could see the clown on telly.

Make a run for it

If all else fails, pack a bag with essentials and run far, far away. Even if you have to live in a ditch and eat grasshoppers, it will likely be an improvement.

Regional pub so desperate to be cool it's pathetic 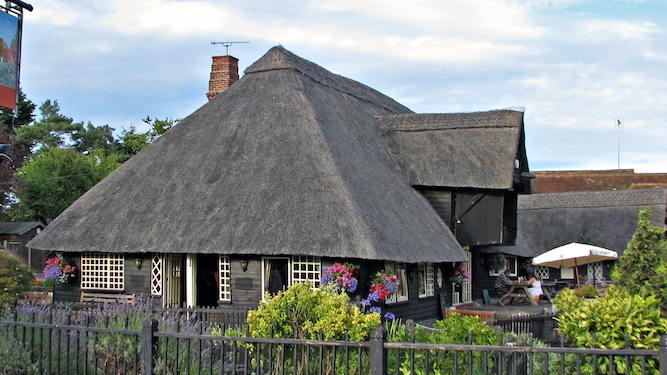 THE landlords of a regional pub clearly aspire to run a trendy London gastropub but cannot quite get it right, regulars have agreed.

The Yeoman’s Arms near Stafford was taken over last year by a man new to the area who wasted no time in turning it into a facsimile of a cool Hoxton boozer that painfully misses the mark.

Regular Tom Booker said: “The first thing he did was print 8,000 new beermats proclaiming it to be the ‘YO! Man Arms’. We should’ve known then.

“It’s been filled with weird vintage stuff, like a bubblegum machine and a framed Carry On Emmannuelle poster, but they’ve failed to commit to a proper theme so it’s like having a pint in a junk shop.

“The menu insists on making every dish a signature dish, like the ‘Aussie Special’ burger and fries with a ring of tinned pineapple on it and some horrible boiled beetroot.

“I came in Wednesday after five-a-side only to discover it was Old Skool Hip-Hop with DJ Miss Twist, featuring Wu-Tang Trivia Teamz. I shan’t make that mistake again.”

New proprietor Nathan Muir said: “Can you believe we’re the only pub with a fusion chef in this whole county? Incredible. They’ll soon be flocking here. I’m losing £4,500 a month.”