CABINET minister Sajid Javid has told the Baby Boomer generation that if they could just hurry up and die all Britain’s problems would be solved at a stroke.

Javid said that initially he was only considering a mass cull of Baby Boomers to solve the housing shortage, but it quickly became apparent that it would remedy every problem facing the country.

He continued: “Brexit’d be out the window, for a start. No more retired xenophobes voting like crazy whose delusions of lost grandeur we have to indulge means no more economic suicide.

“There’d be plenty of nice big houses spare once they’ve stopped rattling around in them complaining about lazy young people while sucking up massive pensions, and the NHS would have capacity to spare.

“We could legalise cannabis, make golf illegal, and everyone could stop pretending the Beatles were anything more than a shitty boyband with pretensions.

“Yep, it’s the universal panacea. So if you could all just fucking die.”

68-year-old Roy Hobbs said: “I am the most important person in Britain and have been all of my life.

“If I died, you would all cease to exist.” 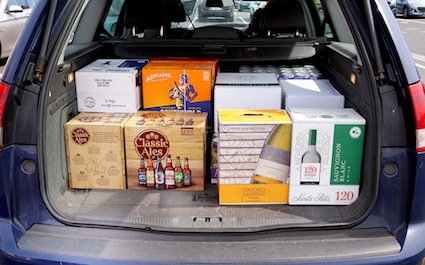 BOOZE cruises from Scotland to England will fail because none of the alcohol will make it home, Scots have admitted.

Scotland’s minimum alcohol price means that, in theory, Scots could save money by travelling south, buying drink cheaply and taking it back home, were this not entirely contrary to the Scottish character.

Bill McKay, from Glasgow, said: “I could save thousands a year by getting my tins in England, but England is no place to be sober.

“You have to be pished to put up with the arrogance, the accents and the possibility of bumping into Nigel Farage.

“Only a Caledonian Odysseus could battle through the hordes of Brexiters on one side and posh Tory twats on the other, all the while ignoring the siren call of the crate of Famous Grouse in the boot.

“But it’d still be worth it to go down there, get absolutely reekin’ and show my arse to some poncey wee fucker.”