A SHOPPER contemplating the range of new seasonal crisp flavours believes humanity has created the monsters that will be its doom.

Mary Fisher of Northampton stood in the crisp aisle of her local supermarket and felt the dark wings of man’s destruction enfold her as she saw what demons our hubris had wrought.

She said: “When the ruins of our civilisation are excavated, when the riddle of our demise is considered, they will find an empty packet of Tesco Finest Limited Edition Candy Cane crisps and wonder no more.

“And when they unearth M&S Bloody Mary Red, Mackie’s Turkey and Haggis Stuffing, and Tyrrells’ Black Truffle and Sea Salt, they will know we were not stalked by a lone horseman but many. So, so many.

“And we have nobody to blame. When a civilisation creates Salted Caramel & Double Cream Kettle Chips, then it wants and deserves a bloody end.

“Fizz & Sparkle Winter Berries and Prosecco Hand Cooked Crisps, finished with a sprinkle of gold stars. Let them be our epitaph. And our warning.” 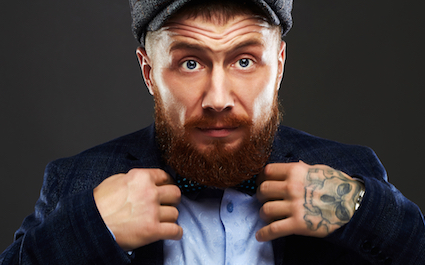 A MAN who favours the David Beckham look of a sharp suit, beard, quiff and tattoos has suddenly realised how ridiculous he looks.

Sales executive Tom Booker was preparing ready for work when he noticed that none of his cliched fashion statements worked either together or separately, leaving him looking like a fucking idiot.

He said: “What started me thinking was the neck tattoo over the starched white shirt collar. I look like I’m trying to get a lenient sentence for glassing somebody outside a nightclub.

“And that led me on to my beard and moustache, which even without the other stuff could only suit a hipster twat making a guerilla documentary about London cocaine culture.

“But they’re even weirder next to my gelled-up quiff. What sort of look is this? Hipster estate agent? Albanian pimp? Wolverine plays John Travolta in Grease?

“I need a style rethink and this time I won’t be copying a squeaky-voiced simpleton who, now I come to think of it, has been mocked for his fashion choices since the sarong at the 1998 World Cup.”

Booker has now shaved his facial hair and cut off his slimy quiff, causing people to inexplicably keep saying they really suited him.