I'll Leave Britain For A Million Pounds, Says Everyone

IF the government wants to spend £1m getting one family to leave Britain then it should start with the people who have lived here the longest, it was claimed last night.

As a pilot scheme in Kent was found to have repatriated just one family of asylum seekers, people across Britain volunteered to take the money off the government's hands and be gone by sunrise.

Tom Logan, a trainee solicitor from Finsbury Park, said: "If it's just a case of making more room then I'd be delighted to vacate my smelly, noisy little corner of the country.

"A million pounds would be nice, but to be honest I'd do it for a plane ticket, my first month's rent and a serviceable ice cream van."

Wayne Hayes, a salesman from Ashford, said: "If the government is going to bribe people to leave the country then it should be bribing the indigenous population.

"I've been working hard and paying my taxes for 20 years and I am extremely angry that a large portion of it is not being used to get me the hell out of here."

He added: "Coming over here, living in our immigration centres, being soaked by our rain and abused by our racists. Bloody cheek.

"Let them spend four hours on the M25 while the two sides of their brain debate which talent show they're going to watch when they get home."

Margaret Gerving, a retired headmistress from Salisbury, said: "If you want me to dress all foreign and pretend I don't speak English then just say the word." 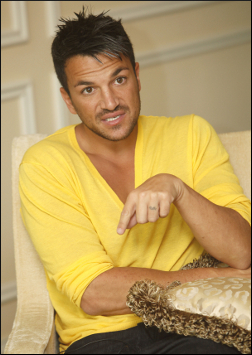 EXPERTS have warned that unless Peter Andre stops weeping over his divorce much of southern England could soon be submerged by his pathetic tears.

The 36-year-old abdomen has been crying like a teenage girl since his shiny wife left him for a another public relations exercise.

Flood scientist Dr Wayne Hayes said: "His eyes are shooting out pressurised jets of water like two big, stupid cannons of inexplicable self-pity. If left unchecked, most of Sussex will be soon be moist enough to bring on a new Triassic age with mangrove swamps and giant iguanas."

And Dr Hayes believes the situation is unlikely to resolve itself: "Every day brings new photographs of Jordan being spitroasted by polysexual nightcrawlers in some Balearic sleazepit, intensifying Pete's pathetic, hysterical grizzling."

An emergency committee led by Brigadier-General Sir Martin Bishop has been formed to tackle the crisis. He said: "We're trying to find ways to convince Peter Andre that his wife was clearly a nightmare.

"The challenge is conveying the information in a way that is sufficiently simplistic for him to be able to comprehend.

"We may use a sequence of massive crayon drawings illustrating her shortcomings, like a giant comic strip, suspended from helicopters above the tiny island on which he sits weeping.'

"Of course the other option is to simply finish him off with a harpoon."