THE imaginary Oxbridge that exists only in the heads of people obsessed with going there is the UK’s top-ranked university.

A new poll by the Institute for Studies found that the mythical amalgam of Oxford and Cambridge, which is like a more heterosexual version of Brideshead Revisited, ranked highest in terms of desirability and wish fulfillment.

Leeds University undergraduate Stephen Malley said: I have no evidence for this, but you spend all day there drinking Pimms and shooting pheasants in the quad with Jeremy Irons.

Then you probably go to a ball with your teddy bear and have sex with someone a bit like Emma Thompson in that episode of The Young Ones.

Office manager Emma Bradford said: If you go to Oxbridge you can have any job you want. You just say to the head of Oxbridge, Can I be Prime Minister? and he says Yes.

Id never go to Oxbridge, though, even if I had any A-levels. You have to ride horses to lectures and I’m all allergic to animal hair.”

We welcome applicants from all backgrounds, although it obviously does help if youve been to a hideously expensive private school to get the necessary superhuman levels of self-assurance.” 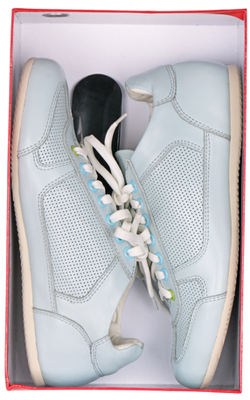 ATHLETES with cheap or unfashionable trainers face bullying from their peers in the Olympic Village, it has been claimed.

British sprinter Stephen Malley has described being picked on by fellow competitors because of his inexpensive market-bought trainers made by the obscure brand ‘TeamSport’.

He said: “As soon as I arrived at the village, this Hungarian runner goes ‘nice trainers’. I said thanks and everybody laughed, clearly he was being sarcastic.

“I was supposed to be sharing a room with a hurdler, but he decided to stay in a hotel because there was a rumour going round that my mum lived in a car and that I had nits.”

“If you don’t, everyone calls you ‘povvo’ or ‘trailer trash’, no one will sit with you in the refectory and you don’t get invited to any of the popular athletes’ after-event parties.”

500m runner Tom Logan’s bullying experience began when he forgot his sportswear and had to wear the ‘special reserve kit’ consisting of random discarded items left behind at previous Olympics.

He said: “The shorts were shiny, tight ‘Kevin Keegan’ things, there was an orange vest that smelled of BO and the shoes were just daps with someone else’s name written in. Now everyone laughs at me and I am definitely not going to be getting off with any volleyball players.”

A London 2012 spokesman said: “Any athlete found picking on another athlete will be sent home immediately. I would especially like to stress that Stephen Malley does not have head lice or smell of poverty.”