Is Ofcom Run By Poofters?

CONCERN was growing last night that Ofcom, the media watchdog, is being run by a bunch of nancy-boy poofters.

The regulator was accused of flaming gayness after it launched an all-out hissy fit against Chris Moyles, Radio One's morning oaf.

Moyles was censured for singing like a whoopsie in a way that could offend other whoopsies, as well as being generally horrid and dressing like a binman.

An Ofcom spokesman said: "After careful consideration we've decide that he's just a big, fat, ugly piggy-wig. And talk about rough trade, I wouldn't touch him with yours.

"I'm sure he thought he was being oh so hilarious but he was actually being a total bitch. The BBC needs to tell him to just be nice."

Media analyst Julian Cook said: "While Ofcom being queer is not, in itself, a problem, one thing that is guaranteed to provoke negative feelings towards the gay community is a major public body issuing terribly important statements every time a stupid DJ makes a stupid joke about a stupid pop star.

"Ofcom needs to realise that people can work out for themselves that Chris Moyles is a tit instead of launching a major investigation every time some arsehole picks up the phone."

Cook, who admits his first name is slightly poofy, added: "Everyone needs to calm the fuck down and stop being so gay about everything." 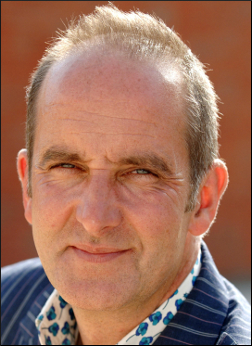 THE basket of goods used to calculate inflation will now include property show Grand Designs, the Office for National Statistics said last night.

The Channel 4 show in which middle class people attempt to show off exactly how middle class they are gained its place at the expense of ITV soap Coronation Street, which has was removed by the ONS for being ghastly.

Other new additions include allowing your three year-old to run around at other people's weddings and having your son diagnosed with attention deficit hyperactivity disorder when he is really just spoilt and badly behaved.

An ONS spokesman said: "Changes in the basket are made to reflect the way that most people today want other people to think how they live.

"So, sitting on the sofa having your tea at six watching Neighbours has been replaced by supper at eight with the entire family clustered around a large farmhouse-style kitchen table discussing the major issues of the day.

"The Freeview box is in because it has BBC4 and obviously no one wants a big dish on their roof because this is not a council estate, thank you very much."

He added: "We’ve also removed battery eggs because even though we're all now buying them again we just can't bear to think about how those poor chickens have to live their lives."

The all-new inflation basket – what's in and what's out

Out
Money
Job security
That feeling of superiority over poor people