Jesus Would Have Had An Isa, Claims Archbishop

JESUS was a fiscal conservative who favoured low-yield bonds and secure tax-free investment vehicles, the Archbishop of Canterbury has claimed.

In his Easter address Dr Rowan Williams said the banks had forgotten the central message of the Sermon on the Mount where Jesus calls for the independent regulation of the credit rating agencies and condemns all those who offer mortgages at more than three and a half times joint annual salary.

Quoting the Gospel of St Matthew, the archbishop said: "And Jesus did sayeth unto his disciples, 'why hast though forsaken me and taken out yet another credit card with 0% interest for the first six months before rising to 19.8% for all new purchases?

"'Didst thou not hearest my Father when he sayeth you can deposit up to 7,200 shekels a year in an Individual Savings Account?'."

The archbishop also called for Britain to become a monk-based economy using newly-closed factories as production centres for modest amounts of honey and mead.

He said: "No need to go mad. Just enough to keep us all in communion wine, heavy underpants and cassock starch."

Meanwhile in Rome, Pope Benedict use his Easter message to urge the warring factions in the Middle East to put aside their differences, 'except all the ones based on religion, obviously'.

Brown Urged To Distance Himself From Himself 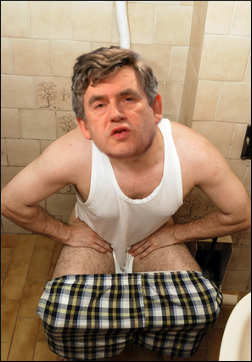 PRIME minister Gordon Brown was last night being urged to distance himself from himself.

Mr Brown is under intense pressure to issue a personal apology to the Conservatives following an attempted dirty tricks campaign by two of his own turds.

Damian McBride, one of the prime minister’s most trusted stools, was forced to quit after sending emails proposing a smear campaign against David Cameron and George Osborne based on unfounded gossip which everyone now assumes to be true.

Derek Draper, the recipient of the emails, emerged from Peter Mandelson’s rectal passage in 1997. He has since been eaten by the prime minister and shat out all over again.

The emails were also copied to Charlie Whelan, one of Mr Brown’s oldest and heaviest evacuations, dumped the morning after an extra-large helping of beef curry at the 1994 TUC conference.

Shadow foreign secretary William Hague said: “Mr Brown cannot go around squeezing out fat, stinking turds all over the Downing Street carpets and then claim they have nothing to do with him.

Meanwhile Alastair Campbell, one of Neil Kinnock’s turds who then went on to shit out Tony Blair in the early 1990s, added: “Their big mistake was not hounding a mentally fragile weapons expert who tried to expose some deliberate lies about an illegal war.”