NOT sure if the person you’ve started talking to is a complete bellend or not? Keep an ear out for these telltale catchphrases.

Traditionally included at the end of an incredibly withering observation to somehow absolve the user of guilt, eg. “You look like total shit, just saying.” What they’re really communicating is that they’re a passive-aggressive tosser who doesn’t have the guts to say what they mean. Just saying.

The apology version of whiplash. At first you think you’re getting the pardon you deserve, then before you know it it’s been cruelly snatched away. Show people who use this phrase just how meaningless it is by saying it after you’ve punched them in the face.

Presumably a shortening of ‘you’re boring’ and ‘f**k off’ that for some reason omits the best word. Predominantly used by cretins whose attention spans have been fried by the internet so anything that isn’t a TikTok video appears dull. Just say f**k off, it’s a timeless classic that doesn’t make you sound like a moron.

Bellowed by middle management types after accomplishing even the most trivial of tasks. Sent an email? Bosh! Closed their laptop? Bosh! Maybe it helps to drown out the nagging voice in their head that reminds them they never even tried to achieve their dreams, not really.

Anything from a meme

Blurting out “Shut up and take my money” or “That’s the tea” doesn’t transform you into a Wildean wit. And that’s saying something, because people who quote Oscar Wilde are in a bellend league of their own and usually get the habit bullied out of them by the time they finish studying their BA. 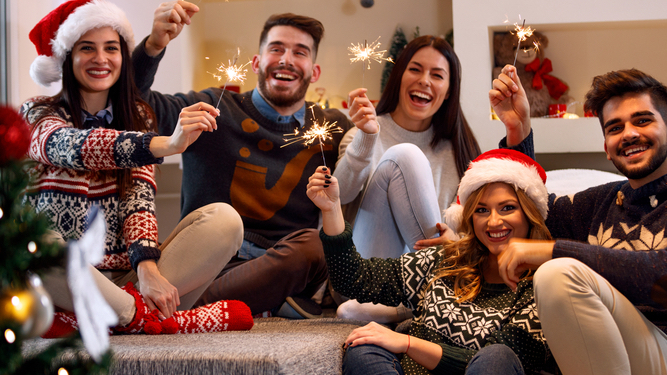 THE British public believes advice to limit the size of Christmas gatherings means you should have loads of people from different households over.

Britons are grateful to the government for finally issuing clear, practical Covid advice so they can ignore it and do the exact opposite.

Donna Sheridan said: “I was worried I wouldn’t be able to have mum and dad over for Christmas dinner, but it turns out all my mates, cousins, the new neighbours and Shelley and Nina from work can come too.

“The message ‘Don’t have big Christmas gatherings’ is about as unambiguous as it gets. It’s going to be tricky cooking for 35 people but I’ll manage. I’ll just order more Aunt Bessie’s Yorkshire puds.”

Wayne Hayes said: “Being told to restrict the spread of a potentially fatal virus by having small gatherings can only mean one thing – PARTY TIME!

“Me and my flatmates are getting all the girls we know to come over and we’ll put up some mistletoe at the front door so we can snog each one and work out who’ll be up for a shag. This is an excellent plan.”

The government has now launched a campaign with a simpler message called ‘DON’T F**KING DIE, YOU IDIOTS’, causing an immediate surge in heroin use, drink driving and train-surfing.