Key to relationships is dumping the other person first

RELATIONSHIPS are about dumping your partner before they can dump you, it has been claimed.

Researchers at the Institute for Studies found that most relationships were really just a competition to be the dumper rather than the dumpee.

Professor Henry Brubaker said: “Nobody likes getting dumped, so you need to get in there with a pre-emptive dumping at the first sign of trouble.

“If your partner is a bit quiet or below par, probably they are thinking about dumping you. So as soon they mention feeling tired it’s best to dump them, otherwise they will win.”

Tom Booker and his girlfriend Nikki Hollis split after five years together. He said: “Friends of mine had been saying I should end it for a while now, so at least I could feel like it was my decision. But I didn’t see it as a competition.”

Hollis said: “It was a competition and I won.”

Booker’s boss, Martin Bishop, said: “I’d been telling him for months, ‘this is a competition, make sure you dump her and that way you win the competition’.

“He probably thinks Bullseye isn’t a competition either.” 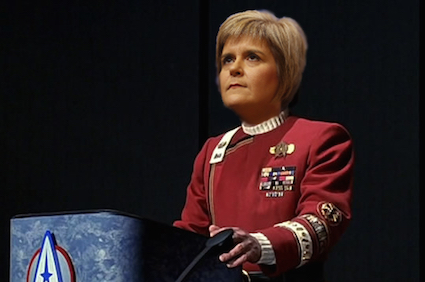 SNP leader Nicola Sturgeon has set out her plans for the entire universe.

Sturgeon pledged to bring ‘core Scottish values’ to undiscovered planets, millions of light years away, as she unveiled the SNP manifesto, This is Who the Fuck We Think We Are.

She said: “We remain focused on achieving independence for the Solar System, but we believe a Scottish-led Solar System can be a force for good throughout the cosmos.

“Let’s imagine a planet that I call ‘Zartax 5’. For too long the working class, blue-skinned creatures of Zartax 5 have been exploited by the lazy, green-skinned bankers of Zartax 4, sipping Ultra-Champagne in their shiny, spherical mansions.

“It’s time to disable the warp drive on the Zartax 4 gravy spaceship.”

The Scottish first minister pledged to create a vast, intergalactic government that would share the natural resources of the bright orange moons, rich in a substance she will name ‘murrellium’.

Sturgeon also dismissed comparisons to Kathryn Janeway, from Star Trek: Voyager, adding: “In Voyager, Janeway was just a captain and, as you can see, I am wearing my Star Trek admiral’s uniform.”