AN absolute lad wearing a football shirt thinks some people wearing Harry Potter robes are pathetic, it has been confirmed.

Tom Logan wears a Chelsea shirt with ‘Lampard’ on the back, even though he has never played for  Chelsea and does not know Frank Lampard.

Logan said: “I saw the absolute nerds on my way back from Stamford Bridge. They were waiting to get into a midnight screening of The Half Blood Prince. They must have been standing there for an hour and a half. I can’t believe they’d stand and do absolutely nothing for that long.

“They were play fighting, shouting and bonding with other people in the vicinity over their shared love for a particular interest. They were all wearing the same elaborate costume. It was so stupid.

“I just don’t understand why these nerds feel the need to escape to this fantasy world. It’s for pansies. Not like football. I watched a man cry real tears on the pitch today because his leg was sore.”

He added: “It’s pathetic getting really into something so niche, and knowing so much about one tiny inconsequential thing.

“Why do they feel the need to stand around in the rain for 90 minutes, dressed as their favourite character and talking about these stories as if they’re part of them or helped shape them? It’s embarrassing.”

Be ready for a nasty shock, US and Britain tell Ireland 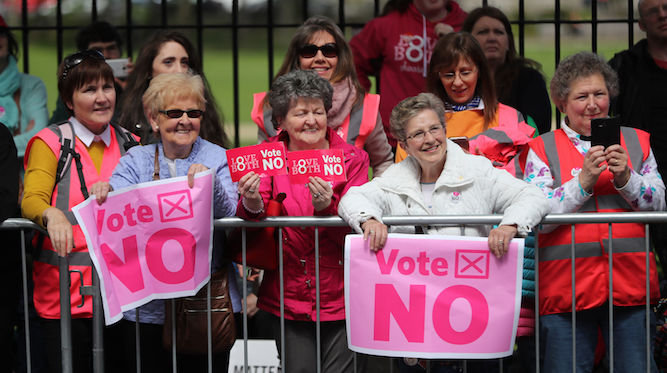 THE UK and US have wished Ireland good luck on its abortion referendum, but warned the country it may find out who it really is.

Joseph Turner, from Southport, said: “I really hope it goes well for you. Shows you as a modern, forward-thinking country, all that bollocks.

“But you know all those people you think you’ve moved on from, who you laugh at, whose outdated values make you shake your head in disbelief? Yeah?

“They are very much still around.”

New Yorker Carolyn Ryan added: “We had one of those votes between the future and the past, a real what-kind-of-nation-are-we thing.

“Did not turn out as one might have hoped.”

Tom Logan, from Cork, said: “We’re going to fuck it up, aren’t we? It’s like Galway Girl going to number one all over again.”