'Legacy' launched as a verb

THE word legacy is now a verb, the government body tasked with re-actioning the English language has announced.

A spokesman for JARGO, which is an acronym for some fucking thing, said the 2012 Olympics had stimulated demand for new verbs.

He said: We were hoping that the games would legacy the future, and it looks as if that legacying is already underway, with the word legacy now being repurposed all over the country.

Some people will of course scoff at the new verb, claiming that is a misuse of language. But now is not the time for pedanting, malcontenting or bluestockinging.

“We should give three rousing rejubilations for this repurposing. Even as the athletes podium, I hope we can be emproudened by the rich legacy of language we daily tongue, and the rich heirlooming this new verbing will bringify.

Professor Henry Brubaker of the Institute for Studies said: This type of functional shift in the English language has been employed by some of our greatest minds, including Shakespeare. Sadly thought it is now the preserve of Apprentice contestants, people who look forward to Powerpoint presentations, and anyone who thinks it cool cool to hold their phone in a weird way.

I blame the parenting.”

Teacher Emma Bradord said: “I hate this sort of thing, and I hate that hating it makes me feel so old.” 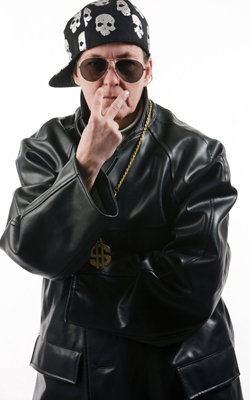 NICOLA Adams historic gold medal win in the Olympic boxing has seen her edge into the top ten of Leeds hardwomen.

The talented flyweight beat the toughest out of half a billion women in China after her trainer used visualisation techniques like imagining the number one seed had spilled her WKD.

Adams will now attempt to break into the Leeds top five with a bout against Pam from The Rose and Bastard in Roundhay, starting with the traditional month-long buildup of telling everybody on her estate that shes going to get fucking knacked the next time she sees her.

Adams said: Its an honour to be spoken of in the same breath as Chapeltown Kath and Mad Bitch Nikki from Kippax.

Leeds’ hard women are great, they really help me to stay grounded – except of course when they’re trying to pod me in a taxi queue.”

Leeds expert Stephen Malley said: “If she wants to be ranked alongside the greats, Adams needs to work on her clouting people with a stiletto technique, and she’s still got a lot to learn about being dragged screaming into the back of a police van.”

Adams looked well ahead against Ren Cancan throughout the fight and even managed to floor her opponent in the second round, although points were deducted when she followed her onto the canvas and tried unsuccessfully to pull clumps of her hair out with her boxing gloves.

It was great day for the battling women of the British Isles, with Irelands Katie Taylor winning her two-hour-long fight that spanned the length of her home town and Wales Jade Jones taking gold in the Taekwondo after agreeing to beat up somebody using just her feet for a laugh.

Adams said: The Olympics has been a great advert for Britain and I think its shown the world why British men are often perceived as being quiet and reserved  theyre actually fucking petrified.