Life is a competition, confirms God

HUMAN existence is all about being better than everyone else, according to God.

The creator was keen to distance Himself from spirituality and good deeds, asserting that the key thing is amassing vast amounts of material wealth.

God said: Jesus rather gave the impression that I have something against the rich but while hes my son and I love the little hippy, hes talking out of his arse.

I blame his mother. I wanted him to go to a good school, make important contacts, set up his own multinational to spread the God brand but when youre born in a barn that closes a lot of doors.

“Had it been up to me I’d have made him cut his hair. But, you know, free will etcetera.

“I’m not saying it was the main reason for his downfall but if he’d had a sensible side parting those Romans might have looked on him differently.”

The Lord pointed to evolution as proof that His grand design was geared toward bigger, stronger and better-looking creatures having all the fun, as well as asking everybody if they could stop crediting Charles Darwin with his invention.

He said that St Peter has very strict instructions on heavens admissions policy, which is similar to that of an elite private member’s club.

God added: Its eternity, for My sake  do you really think Id rather spend it with a flower-arranging spinster than Jack Nicholson? 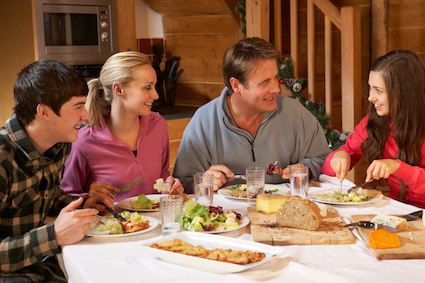 ADVERTS which portray family meals as happy affairs are misleading, it has been claimed.

Commercials for stock cubes, supermarkets and butter depict households enjoying each other’s company at the dinner table, rather than simmering with mutual resentment.

Martin Bishop, from the Advertising Standards Authority, said: “The only thing most families have in common is DNA. It’s not like they’ve chosen to hang out together because of their shared interests and world views.

“Also they see each other every day, meaning there is little in the way of personal news except problems with public transport.

“So the chances of them all having a great laugh together are very slim to zero.”

However he praised a new advert for spicy beanburgers where the teenage daughter has become a vegetarian just to annoy her mother.

“You see a brief flash of loathing as the daughter says, ‘I don’t eat your food any more, it’s immoral’. The dad then mutters something about hippies and leaves the room.

“Everyone thinks he’s just gone to the toilet, but he never comes back.”