HUNDREDS of pupils were subjected to a series of depraved attacks on their basic common sense over a 40 year period, the Irish government has confirmed.

The report states: "Typically the children would be woken up at 7am by one of the teachers screaming about how fossils were nothing more than Satan's place mats.

"By 5pm, the children had been through repeated, sordid levels of utter horseshit.

"Some were so scarred by their experience that they grew up to watch all those programmes about haunted houses on Living TV and say things like, 'you can't prove there aren't ghosts'."

The report also revealed how the maltreatment of logic reached the highest echelons of the Church, with the Pope himself teaching children they would roast in the 'Bad Fire' if they touched themselves in the 'whore-equipment'.

One victim, who refused to be named, said: "Father Mackie called me into his office, sat me on his knee and forced me to believe in the indivisible nature of the Trinity against my will.

"I kept telling him that the idea of a patriarchal creator was inherently self- contradictory and with no basis in rational thought, but he wouldn't stop…. he wouldn't stop."

The report has proposed a series of reforms including Ireland finally dragging itself out of the 14th century and no longer believing in things that obviously aren't true.

Not If You Paid Us, Say Gurkhas 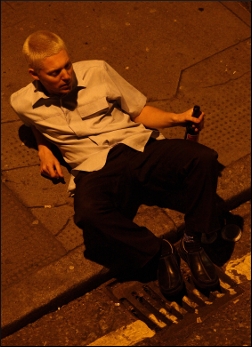 VICTORIOUS Gurkhas last night said they wouldn't live in Britain if you paid them, insisting they really just wanted to prove a point.

As the government pandered shamelessly to 15,000 of the tiny mountain warriors, they admitted that, to them, Britain was a vast, open sewer filled with bloated turds, but it was the principle of the thing.

A Gurkha spokesman said: "I think we can all now agree that if you ask a man to risk his life while hacking off the heads of your enemies for you, then you should at least be willing to live in the same country as him.

"Now that we've established that, let me be the first to say that Britain is a crumbling, high-tax nightmare filled with fat, lazy cretins who wouldn't know culture if it vomitted all over them at 11.30 on a Friday night after eight pints of that piss water you call beer."

Emma Bradford, a newspaper reader from Doncaster, said: "I've never had a problem with them all moving here, what with them being so tiny. But I did keep asking myself, 'who in the name of Christ would want to?'"

In the wake of the victory, Gurkha chieftan Joanna Lumley was briefly the most popular woman in British history before ruining it all by saying something nice about Gordon Brown.

Tom Logan, an interested party from Hatfield, said: "I was very impressed by her passionate, no-nonsense approach and the way she dealt with both MPs and the media, to the extent that I would have proclaimed her my warrior queen and died for her in battle.

"But then she said something nice about Gordon Brown so she can fuck off."

Meanwhile thousands of British men in their 40s have added Ms Lumley shouting ferocious Ghurkha slogans to their list of things that should work just fine, thank you very much.