A LONDONER who helped a woman find her way to a hospital appointment is still reeling from the intense power of human interaction.

Account manager Wayne Hayes moved to London twelve years ago and quickly adapted to a lifestyle of blanking all strangers and avoiding connections with people beyond his immediate circle of friends.

Hayes said: “It’s been years since I acknowledged someone else’s existence in the street, and even longer since I looked anyone in the eye.

“This old lady was gesturing at me to take my headphones out so I ignored her. assuming she was a con artist, a time-wasting homeless, or worse just a lonely person.”

Hayes took out one earbud and pointed the woman in the general direction of the big hospital he’d seen in the area.

After being thanked for his help, Hayes experienced a burst of pure euphoria: “It was even better than the time I found a twenty on the floor of my favourite pub.

“I’m not sure if I gave her the right directions though because to be honest I just use the underground to get around and have no idea of the actual geography of London.

“I hope she did get to her appointment. Now need some incredibly strong coffee to get me back in ‘determined bastard mode’.” 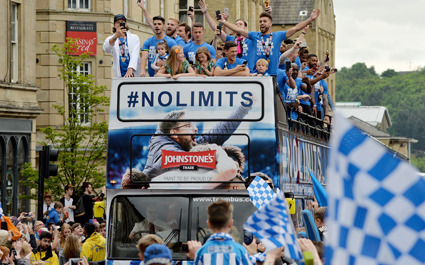 THE other Premier League teams are hatching a plot to bully newcomers Huddersfield throughout next season.

As Huddersfield celebrates winning the Championship play-offs, the managers of bigger clubs like Chelsea and Arsenal began coming up with humiliating ways to put the upstarts in their place.

Arsene Wenger said: “I always enjoy seeing fresh meat in the Premier League. I can’t wait for our game against Huddersfield next season so I can offer Wagner my hand but then retract it and make a loser sign on my forehead.

“I say we make Huddersfield play their first game naked. We’ll tell them that all promoted teams have to do it as an initiation thing.

“Better still maybe we’ll beat them 1-0 and have Per Mertesacker score the goal just to take the piss.”

Chelsea have already made plans to change ‘Huddersfield’ on the scoreboard at Stamford Bridge to ‘Uddersfield’ while Jose Mourinho is plotting to use his famed mind games to convince the Terriers that their game against Manchester United has been cancelled.

Huddersfield boss David Wagner said: “Jurgen Klopp is my friend, I just hope he doesn’t behave differently when he’s around the other big managers.

“I’m sure the referees will look after us, you’d never catch them siding with the bigger teams.”