EVERYONE drinking at least three pints of beer at lunchtime will keep Britain’s economy on track, it has been claimed.

Professor Henry Brubaker of the Institute for Studies said: “Throughout the 80s and early 90s, office workers would flee the office like rats out of a trap at half twelve – twelve on a Friday – heading straight for the pub.

“However bosses fell under the influence of soulless foreign ‘business experts’, particularly Americans, who believed that drinking several pints of beer in the middle of the day could negatively effect productivity.

“But it’s only after the shift away from midday alcohol binges towards eating a sad little sandwich at one’s computer that everything went to shit.”

He said: “Returning from the pub to the office you feel sleepy, and entering a waking-dream state which is when you have your cleverest thoughts. I call it the ‘creative stupor’.”

Sales manager Tom Logan said: “It does seem that eradicating all the fun from life in a grim quest for efficiency hasn’t actually worked.

“I generally do less work when drunk. But perhaps I’m so incompetent that this is a good thing?”

Britain to honour its heroin addicts 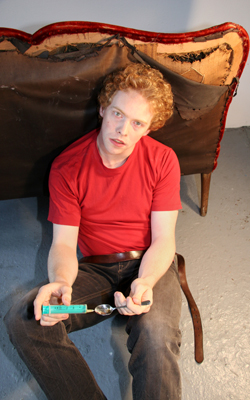 THE contribution of drug addicts to British society is to be honoured at the first National Junkie Day.

With brave skagheads consistently overcoming guard dogs and alarm systems to in their quest to nick things, the public has demanded that these forgotten heroes should be recognised.

The focal point of National Junkie Day will be an event at Hyde Park with shooting up displays, blagging masterclasses and live music from hugely self-indulgent, smack-addicted indie bands.

A spokesman for the event said: “With their croaky voices and sunken cheeks, junkies are as much a part of Britain’s cultural heritage as bulldogs.

“Whether they’re arguing in a park, taking your DVD player to a cash exchange shop or trying to blag some change for a ‘phone call’ that inexplicably costs 13p, they are always on the go. Except, of course, when they’ve just scored.

“But this event isn’t just about smackheads. It’s about the whole drug addict spectrum, crackheads, speed freaks and meth heads.

“Also the middle class musicians whose flirtation with heroin leads them to petty crime and parent-funded trips to rehab.

“Without their unflinching commitment to getting wrecked, many dealers would be unable to keep their pimped-out Beamers on the road and the tracksuit bottoms industry would collapse overnight.”

Heroin addict Tom Logan said: “I’ve always been pretty much full of self-loathing and regret, so this is a great morale boost.

“People dismiss junkies as useless but I’ve actually got loads of great ideas for things. Not that I’ll ever do anything about them, because I’m on smack.”