A MAN who spends a lot of time in a cool cafe is desperate to become friends with its staff, it has emerged.

Nathan Muir goes to the One 60 cafe in Stevenage most weekdays for a cup of coffee. But despite knowing about the bands that the barista plays and even making impressively obscure playlist recommendations, Booker doesn’t feel like they are quite friends yet.

Booker said: “I heard them planning a staff night out recently and they said what bar they would be going to and when.”

“I don’t think it would be weird if I just happened to be there when they all arrived. I’d tell them my name and the conversation would just flow from there.

“Though I do then run the risk that they will change their plans and I’ll be left by myself in a bar that I hate waiting for people I don’t know. I’m not sure how cool that is.”

Dog appalled to discover he is a 'fanny magnet' 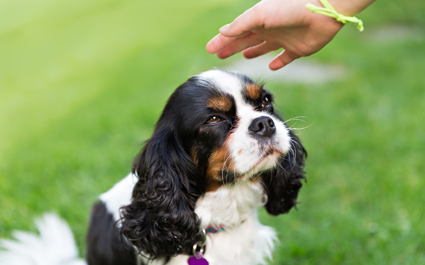 A DOG has been dismayed to realise that he is being used as a way for an average-looking man to attract women, it has emerged.

King Charles spaniel Wayne Hayes believed owner Tom Booker wanted a faithful companion, and felt betrayed when he heard Booker describe him to a friend as a ‘fanny magnet’.

Hayes said: “I suppose it’s a bit weird for a grown man to choose such a cute looking dog as me, but I assumed Tom was a caring, sensitive guy who loved small fragile mammals.

“Turns out he’d read an article in Men’s Health about what women like and buying a dog was much easier than getting a six pack. I’m a walking sex trap that he pays in Pedigree Chum.

“The problem with Tom though is that he’s a charmless tosser and that becomes pretty clear after five minutes of conversation. The theory is that women are attracted to a guy with responsibilities but I think they genuinely fancy me more than him.

“Plus, he has to carry bags of my warm shit around in his coat pocket.”