Man lying about living in London

A MAN is point-blank lying about being ‘London based’.

STEPHEN Malley claims on his Twitter page that he is based in both London and Swindon, despite having no address in the capital and not having been there since a trip to see The Lion King in 2011.

School friend Martin Bishop: “When I saw that he lived in both places I thought he must be raking it in. Then I spotting him working in a Wetherspoon in Swindon town centre and realised he was lying to look cool.”

Malley said: “As a part time graphic designer, you need people to know that you’re living in London. If I said I lived in Swindon, powerful people would probably think I use crayons to design flyers for dwarf-tossing competitions.

“It’s not dishonest. The important thing is that I want to live in London.”

Malley also claims to live in London on various dating websites. He added: “If I got a date in London I would probably get the Megabus up, it’s only a quid if you book it enough in advance.

“Then I’d have enough money left over to take her to one of those trendy Angus Steakhouse places that Londoners are into.”

Bono: Surely this is the stupidest shit I’ve ever said 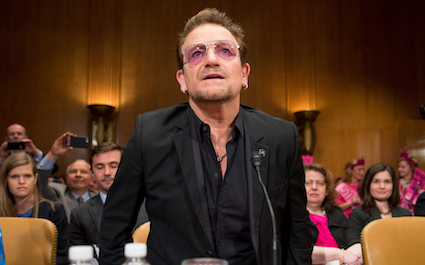 BONO proudly believes his claim that comedians should be sent to fight ISIS to be his most dumbshit pronouncement yet.

The U2 singer has admitted that his 36 years in the idiotic assertion business mean it is harder to make an impact, but believes that his new statement is groundbreakingly moronic.

He continued: “If you can’t grab public attention by standing up before the US Senate and saying that Chris Rock, Amy Schumer and Sacha Baron Cohen should go to the Middle East to battle ISIS, then I give up.

“When we began U2, I didn’t want to be a here-today-gone-tomorrow arsehole like Adam Ant or someone. I wanted to be the biggest arsehole in the world.

“And all these years later I’ve still got that ambition. Come on, a 55-year-old man still thinking he’s outraging the squares while pathetically dropping names he wrongly imagines the young people think are cool?

18-year-old Eleanor Shaw said: “Bono? Yeah, my dad was always on about what a twat he is.

“But I prefer irredeemable knobheads from my own generation, like Justin Bieber.”