A GROWN man is feeling intimidated by a group of teenagers who have not even noticed he is there.

36-year-old Martin Bishop approached his local Tesco Metro intending to purchase a newspaper, but became crippled with fear after noticing a group of youths loitering outside.

Bishop said: “I have no doubt that every single one of them is an insecure, self-conscious bellend with terrible dress sense, and yet I am scared to walk past them.

“What if they ask me to buy them some cheap cider, or film me accidentally doing a funny walk and shame me on TikTok? I’d rather get beaten up than suffer viral humiliation.

“Perhaps they’ll snigger at me in a way that suggests I’m a sad, old man who’s quickly approaching death having achieved nothing. Or is that just me projecting?

“The truth is they’re probably earnestly discussing climate change or tuition fees, which is why they look so pissed off. But I still can’t shake the feeling they might steal my pocket money even though I’m older than their parents and their teachers.”

Teen Jack Browne said: “We ignore anyone over the age of 21. Mainly because they don’t understand the anxious paranoia of our young tortured lives.”

They're fatter than you: five constructive ways to compare yourself to your friends 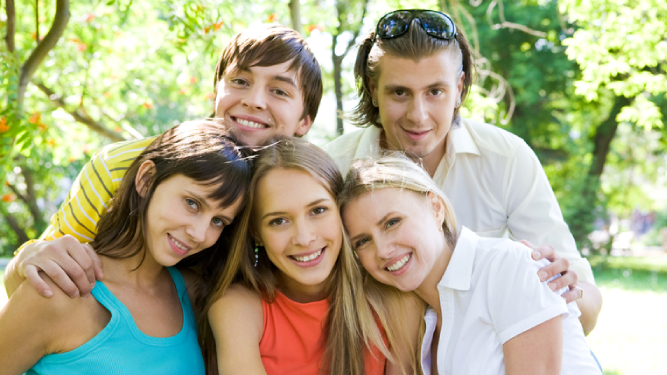 COMPARING yourself to friends can depress you unless you focus on their worst aspects, such as these flaws:

They’re fatter than you

You present yourself to the world as a kind, compassionate person who wouldn’t dream of fat-shaming. Inwardly though you feel like a champion because your friends haven’t shifted their lockdown weight yet and are a couple of pounds heavier than you. It’s a petty victory that tarnishes your soul, but you’ll take it.

You make more money than them

You’re raking in five figures doing a menial job you f**king hate, meanwhile your friends are earning fractionally less while pursuing their dream careers. Sure, they look happier than you and there’s a real risk their aspirations could pay off financially, but at this very moment you’re the top dog. Bask in your disgusting glory.

They’re lower on the property ladder

Few things give you the warm fuzzy glow of self-superiority more than your friends who still live with their parents. They have excuses, like saying it’s only for a year while they save for a deposit, whereas you’re pissing away two-thirds of your salary on your house share’s shoebox room. Clearly you’re the winner here.

They’re older/younger than you

Friends who are older than you are closer to death, so there’s no need to be jealous of them. At the same time your younger friends will have more of this planet’s doomed future to endure, so if anything you should pity them. Weirdly enough your precise age is the perfect one to be, if you’re a smug narcissist.

They have a loving partner

Absolutely nothing to be envious of here. So what if your friends have doting, caring partners who enhance their one, brief existence? You’re a free agent who can do whatever they want, whenever they want, such as eating an unhealthy amount of Quavers in your pants while watching Men in Black 2. Your mates can only dream of this lifestyle.