A MAN who refuses to drink non-craft beer is having cereal for his tea again tonight, it has been revealed.

Martin Thompson, 37, is proud to possess an “exquisitely developed” palate for artisanal brews, and will happily pontificate on aromas, body and mouthfeel for hours.

He said: “I can’t be within 20 feet of someone drinking Carling or Fosters – it’s an assault on my belief system as well as their tastebuds.

“But I also can’t stand people who are into poncey food – I like proper meals, none of that pretentious muck.”

Thompson explained that his diet is exclusively made up of Cheerios, frozen things from Iceland and meat-based meals that come in a can. He mixes it up with chips and saveloy from the chippy every Friday, but will only ingest vegetables at Christmas, to stop his mum telling him off.

Meanwhile, he spends several hours a each week logging his latest tastings into his treasured “beer bible” and maintains that people who talk about visiting restaurants are wankers.

Thompson’s lifestyle has led him to spend a considerable amount of time in his local microbrewery, where there is a revolving selection of craft beers and a food menu that seems to have been written by an obese eight-year-old.

North reminded once again that it supposedly loves brass bands 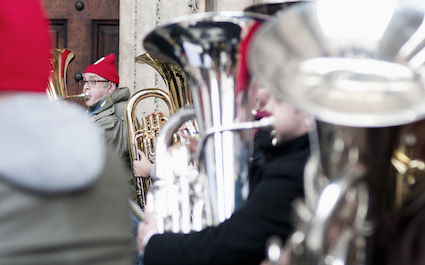 NORTHERNERS are once again being confronted with the brass bands they are supposed to enjoy in every town and shopping centre.

From Blackpool to Cleethorpes, every square echoes with the sound of the least popular section of the orchestra parping a selection of festive favourites while passers-by grit their teeth and assume someone else is enjoying it.

Tom Booker of Ashton-under-Lyne said: “Oh, they’re back. Well, part and parcel of living here I suppose. Got to take the rough with the smooth.

“I know they’re very important to our culture because of the miners or the Whit walks or something, and well, yes, there they are. That was Once In Royal David’s City? I’d never have guessed.

“Piano’s lovely. I always enjoy the sound of a string quartet. You can’t beat a choir. But for some reason we get these red-faced buggers in uniform trying to reproduce a tune on instruments never designed to carry one.

“Still, I’m Northern and they’re Northern so it is what it is. I’ll put a fiver in their trombone case. Keep the flame alive.”

Tuba player Joseph Turner said: “Oh fuck, we’re coining it in. They bloody love this shit. I’ve no idea why.”