A MAN without a trendy oak panelling front door is a dangerous non-conformist, neighbours believe.

Retail worker Tom Logan has caused concern by having a cheap-looking plastic front door instead of a sleek, sturdy modern one.

Neighbour Donna Sheridan said: “Most people in the street have got a proper light brown oak panelling door, ideally with a vertical silver handle, but Logan thinks he’s different with his shitty white plastic door that looks like it came out of a skip.

“I don’t know what he gets up to in there, probably druggie sex parties where they all wear masks to make it extra-perverted. At least the door will be easy to bash in when the police arrive.

“I just wish a nice family with a normal door would move in, although it’ll be hard to sell the property if there are male prostitutes under all the floorboards.”

Logan said: “Most evenings I just watch telly or use my vast occult library to open portals to evil dimensions.” 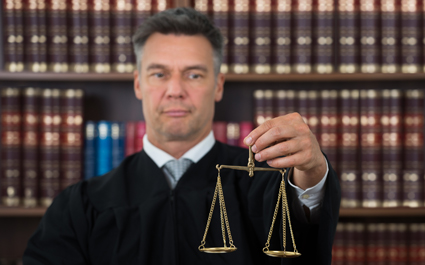 BREXIT supporters have set up a network of ‘people’s courts’ where justice is based on popular opinion.

Anti-EU Britons’ dissatisfaction with the legal system has led to the creation of makeshift courts dealing with everything from witchcraft to disputes over borrowed garden tools.

Accountant and people’s judge Roy Hobbs said: “The court convenes in my living room, with the legal cases argued by our ‘barristers’ Sandra the local florist and Degsy, an unemployed decorator who’s seen A Few Good Men five times.

“Our biggest case so far has been the legality of Brexit. The court came to the unanimous decision that it is totally brilliant and anyone who disagrees deserves a toe up their arse.

“You can accuse anyone of anything. Last week we dealt with 48 cases of people being shortchanged at the local Sainsbury’s, a French spy and an old lady who put a curse on a horse than made it go lame.

“Punishments range from the stocks for not wearing a poppy to hanging for more serious crimes, such as men having long hair.

“Tomorrow I’ve got the case of a man who’s guilty of liking Nicola Sturgeon. He won’t be spouting his lies when he’s being hit in the forehead by turnips.”