A MAN is much happier after getting a well-paid job on a dubious survey into the nation’s ‘wellbeing’, he has revealed.

Julian Cook feels his life has vastly improved after getting a management role working on the vague, highly subjective and probably pointless poll.

Cook said: “It’s fascinating finding out if people’s wellbeing is increasing. Mine definitely is because I’m coining it in and never work more than 37.5 hours a week.

“Cynics might argue that just asking loads of people whether they feel happy or anxious is far too crude a methodology to have any value, but I’m definitely feeling a lot more chipper.”

Cook added: “Obviously I’m aware the survey is perception-based so people might be sad because their gerbil has died or ecstatically happy for a shit reason like thinking all the immigrants are going to be deported.

“However I’ve got my own office and we get free doughnuts on Fridays. That’s a confirmed 0.000001% of the population that is doing great.”

Cook’s wellbeing later increased even further after the survey was widely reported in the media and all his friends were impressed.

Twats who moved out of London want a medal or something 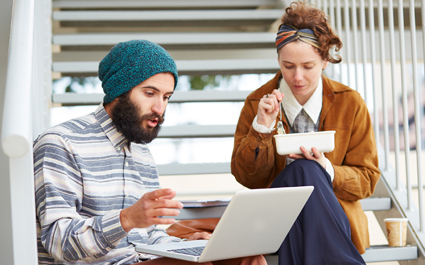 A COUPLE who moved from London to Bristol are talking as if they’ve done something extremely brave.

Illustrator Mary Fisher and vague internet job worker Tom Booker moved to Bristol because they wanted to buy a relatively cheap house, but keep banging on about their ‘old lives’ in London.

Fisher said: “We were out every night in London at cutting-edge art galleries, restaurants you wouldn’t have heard of and plays where they make you dress up as a soldier. It was pretty amazing, as you can imagine.”

Seemingly forgetting that Bristol is still a big city with loads of crackheads, she added: “In the end though we were prepared to sacrifice that for a quieter life, where we have an allotment and wear dungarees like it’s the war.”

Booker said: “Of course we’re very lucky that everyone can work remotely these days. Well, everyone like us. Not people with normal office jobs but there’s probably only 50 million or so of them.”

Fisher added: “Now that we’re here were want to make a positive impact, possibly by setting up the puppetry academy that this working class area so desperately craves.

“We’re not saying we deserve a medal but some kind of trophy might be good, if it was designed by Grayson Perry and was tasteful.”