MINISTERS are being urged to extend a tax break for married people to any couple whose sex life is a distant memory.

The plan to give married couples an extra £150 a year has angered people who say their long-term relationships are just as devoid of genital fun as any marriage.

“I want the government to recognise that with money.”

Meanwhile, gay groups say the tax break should also include sex-free civil partnerships. Julian Cook said: The myth about gay guys having loads of sex has turned out to be a very huge myth indeed.

Senior Tory Lord Tebbit has vehemently opposed the reforms, adding: If all it takes is not having sex, whats to stop a non-incestuous brother and sister claiming it? Or a cowboy and his unattractive horse? Or two men, a frog and a banjo?

“Who are you? What are we talking about?

Air passengers allowed to be as irritating as they like 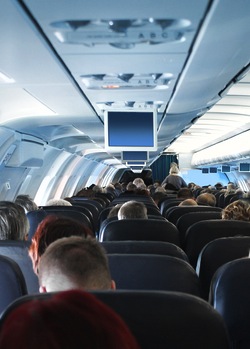 AIR passengers will be allowed to turn on all devices during take off and landing as long as they turn the volume up as loud as it will go.

A ruling by the US Federal Aviation Administration will pave the way for travellers around the world to annoy you until you pray for catastrophic engine failure.

Passengers must now carry a minimum of five electronic items, including at least one hand-held childrens video game.

If the sound produced by any device is deemed insufficient by flight attendants, passengers will be asked to orally mimic it at an amplified level.

An FAA spokesman said: Weve tried to get everyone to be polite and courteous during a flight, but the bastards wont be told – so were instructing everyone to just be a total bastard all the time.

Its got so much worse since they started making everyone take their shoes off at security. Many passengers see it as an invitation to go feral.

Bill McKay, a frequent flyer, said: Im concerned about this ruling, as I like to sit next to strangers and tell them my 9/11 conspiracy theories when were up in the air.

How will I be heard over the sound of The Artist booming from someones iPad?

The ruling has been passed despite experts warning that using electronic devices during a flight still makes air travel unsafe. The authorities are hoping for at least 50 passenger deaths by Christmas.