May pledges to bring back the slipper

HOME secretary Theresa May is to call for the restoration of the slipper as a deterrent to Britain’s young dodgers, perils and minxes.

She will also recommend the use of castor oil as punishment for catapult and peashooter-related crime, as well as peeping through keyholes.

And in her speech to the Tory conference, May will announce a Tower of Dogs Act, to prevent menaces posing as grown-ups to get into cinemas by piggybacking on their dogs and covering themselves in overcoats.

There will also be a clampdown on streetfighting, in particular involving The Gasworks Gang, the Jocks And The Geordies and The Bash Street Kids.

May said: “We have seen communities blighted by the anti-social sight of small dustclouds with half a dozen arms and legs protruding and  their cries of “Take that!” and “Ooyah!”

“Much of today’s crime is committed by girls as young as eight, many of them wearing berets. As recently as the 1980s, we could rely on their fathers to administer a good whacking to them for filling the park drinking fountain with fizzy pop.

“Under this government we will soon be able to read about this happening again.”

May said that it was important to address underlying issues such as diet. “We need to ensure that our children desist from eating so many scrumped apples.”

But shadow home secretary Yvette Cooper accused May of ignoring the reality of youth crime, adding: “The Tories  are just a bunch of softies who wear polka-dot ties, play hopscotch, have mates called Bertie Blenkinsop and own poodles named Foo-Foo.”

Hale and Pace to headline Glastonbury 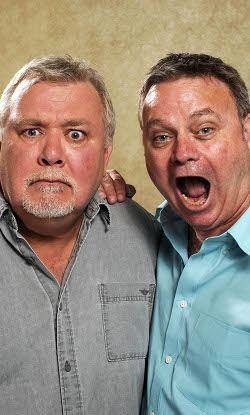 THE Glastonbury festival has revealed Hale and Pace and the Crazy Frog will be next year’s headliners, moments after tickets sold out in record time.

As desperate fans paid out hundreds of pounds without knowing any of the acts, organiser Michael Eavis predicted a ‘celebration to rival the Olympics’.

He added “I cant wait to see Hale and Pace, I hope they do The Stonk.

Also appearing will be St Winifreds School Choir, famous for their hit Theres No One Quite Like Grandma. Choir member Donna Sheridan said: We probably wont play that one. Weve got some great songs on our new album that we cant wait to sing.

Eavis said that from next year all festival food will be provided by Ginsters, adding: “Glastonbury is renowned for its eclectic food offering and so the pasties will be available in both cheese and onion and meat.”

The festival is also relocating from Mr Eaviss idyllic Somerset farm to an Asda car park on the edge of Taunton.

The festival will still be surrounded by a twelve foot security fence, but instead of deterring gatecrashers, it will be used to stop ticketholders escaping.

Tom Logan, who bought a ticket on Sunday, said:  At least it’s not fucking Mumford and Sons.