Men with extremely loud motorbikes twats in other ways too

MEN who like to rev ear-splitting motorcycles at night are arseholes in other ways as well, research has found.

The Institute for Studies discovered people who like showing off on powerful motorbikes are not simply ‘bike-mad’ but also enjoy other bellend activities.

Professor Henry Brubaker said: “Twats who make people jump out of their skins with noisy motorcycles also tend to like The Expendables movies and rugby.

“We also found that the sort of arse who stops you getting to sleep by shrieking past your house at 1am on a 500cc Kawasaki is 75 per cent more likely to have attended a mixed martial arts class than a normal person.

“Even within the sphere of motorcycling most had their own strange and idiotic vocabulary, such as referring to a motorcycle helmet as a ‘skid lid’.

“There was even a high correlation between accelerating crazily in busy traffic and dreary bloke banter such as asking friends whether a new girlfriend was ‘dirty’.”

Motorcyclist Wayne Hayes said: “Opening up the throttle of my high-performance Suzuki is better than sex, which is lucky because women find bike chat quite off-putting.” 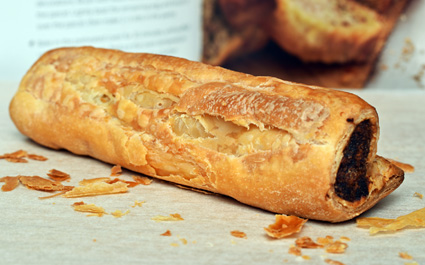 A NEW food line aimed at greedy bastards is now on sale at Morrisons.

The Greedy Bastard range includes a yard-long sausage roll containing the meat of an entire pig.

Shoppers can also pick up a five-metre meat pasty for just half the price of a small lettuce, and a bucket of own-brand cola for the cost of half an apple.

A Morrisons spokesperson, said: “We believe in giving our customers what they want and what they want is massive fucking portions of things covered in pastry.”

Customer Tony Booker said: “Instead of having to buy three or four sausages rolls at a time, now I only need to buy one, or perhaps two.

“It is actually a much healthier option because it stops me snacking between meals. I have been gnawing one massive sausage for three days and have had no snacks whatsoever.”