MIDDLE class parents have expressed concern at the lack of dark chocolate Easter eggs for their children’s refined palates.

Despite an abundance of creamy milk chocolate eggs, comfortably-off Guardian-type parents believe manufacturers have failed to cater for the growing demand among the nation’s most difficult children for bitter chocolate.

Mother Carolyn Ryan said: “My Archie relishes the rich and complex tones of dark chocolate and has done since his fifth birthday when I banned all dairy, gluten and anything with a fondant centre.

“And supermarkets can’t say it’s due to a lack of demand. I know at least ten six-year olds who would kill for a dark chocolate bunny infused with cardamom.”

Eleanor Shaw, speaking from a Waitrose car park, said: “My seven year old daughter requested a minimum of 80 per cent cocoa solids in her egg this year, which is proving unbelievably difficult to source.

“At this rate I’m going to have to give her marinated olives instead.”

Ryanair passenger hopeful he might get aggressively dragged off 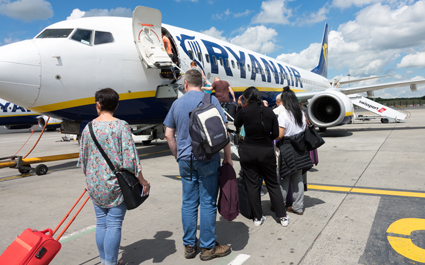 A RYANAIR passenger has confirmed he would not mind being forcibly dragged off.

Wedged in a stained middle seat the size of a pizza box, Tom Booker has been idly fantasising about being forcibly removed from the plane and saved from a two-hour sweaty ordeal.

Booker said: “It’s only a boring work trip, and a couple of minutes of pain and humiliation are definitely better than being treated like a battery-farmed hen and trying to ignore my neighbour’s body odor while cabin crew try and make you buy a £30 cheese roll.

“At this stage I’d happily accept being dragged by my neck down the aisle rather than have to take this flight.

“I’d try and open the emergency exit and slide to freedom, but the cruel irony is I’m far too boxed in to get anywhere near it.”

Crew member Emma Bradford said: “Mr Booker tried to cause a disturbance by letting out a blood-curdling yell and banging his head repeatedly against the seat in front.

“I don’t think he realises that we’re Ryanair, that’s just normal behaviour for us. When he manages to get out on the wing with a bottle of Smirnoff, then we’ll talk.”