Most men 'don't know what masculinity is'

MOST British men have no idea what masculinity would actually involve, it has been confirmed.

As Diane Abbott, professor of nothing at the university of nowhere, declared that men were being far too masculine, most men said she had obviously never met them, or any of their friends.

Or anyone they went to university with.

Tom Logan, from Finsbury Park, said: “Should I be having more fights? Jesus Christ, that sounds hellish. And anyway, how would I actually do that?

“Do I get to wear a helmet? Is pinching acceptable? And, crucially, if I give in will the other chap stop hitting me?”

He added: “According to the Guardian, if men stop being men then Britain would save £42 billion. If I stop being me, then the Waitrose deli counter is going to lose about fifty quid a week.

“There will also be redundancies at Nivea.”

Stephen Malley, from Hatfield, said: “I quite like Manchester United. Is that masculine? It’s not, is it?”

But Martin Bishop, from Peterborough, said: “I suspect Diane Abbott is talking about men from housing estates. But they have always been very masculine. Or, to put it another way, terrifying.

“I should really give this issue some thought, but I’m trying to be more masculine.

Cashpoint morons warned to plan ahead 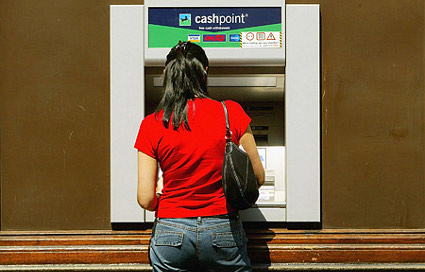 DECIDING in advance what you want from a cashpoint can stop others wanting to kill you, it has been claimed.

The Institute for Studies found that potentially dangerous bank machine deliberation could be avoided by planning your transaction before reaching the front of the queue.

Professor Henry Brubaker said: “If you’re waiting to use a cash dispenser, ask yourself a few questions. The main one is ‘how much money do I want?’

“It’s good to have a specific figure in your head, for example £20. Or any multiple of ten, whatever.

“Bear in mind that cashpoints are not places for quiet contemplation, phone calls or socialising. Nor are they crude arcade machines for your stupid, idle amusement.”

Retail assistant Mary Fisher said: “But I like to be ‘in the moment’ when I’m operating a cash machine.

“It’s like free jazz, there are no rules and time is not a factor. I’ve just got three different cards – two of which have expired – and a headful of vague possibilities.”

Office worker Tom Logan said: “I enjoy going to cashpoints and pressing all the different buttons because of the lovely computer music it makes. It’s like my own private Kraftwerk concert.

“How could anyone possibly have a problem with that?”