A MUM-OF-TWO has been left distraught after visiting a soft play centre with a critically low phone battery.

Emma Howard was just five minutes into a trip to the Wacky Wally Play Pit in Birmingham when the gravity of her error became clear.

She explained: “I had just sat down to a cup of terrible coffee when I took out phone – my only solace in the colourful padded hell of the soft play arena – to see a flashing graphic of a depleted battery.

“We had only just arrived and the kids would not leave without a major kick off. I was fucked.

“I considered faking some kind of seizure to get out of there but my phone completely died just as I was Googling ‘how to fake illness in a soft play centre’. In the end, I had to sit there for three hours without a phone like a psychopath.

“At one point I got so desperate, I watched my kids jump into germ-laden plastic balls 72 times.”

A government spokesman said: “We advise parents to double-check battery power before entering anywhere with piss-covered slides and poor quality wall paintings of something called ‘Barry the Octopus’.”

Couple solve all their problems by having a baby 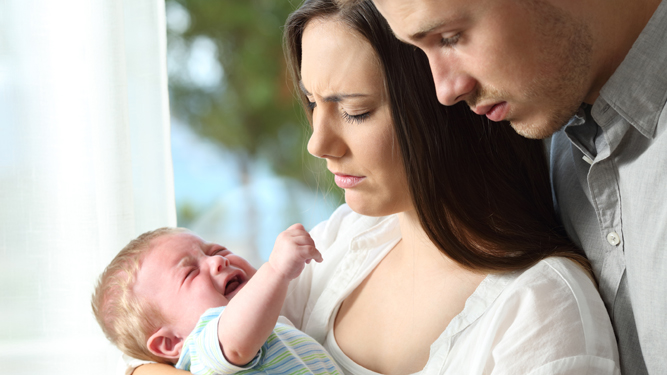 A COUPLE have permanently solved all of their relationship issues by having a baby, it has emerged.

Emma Bradford and partner Tom Booker had been having some problems including lengthy arguments over minor domestic tasks, suspected infidelity and general dislike of each other, so they decided to have a child.

Bradford said: “We’d talked about splitting up. But then we realised we hadn’t even tried procreating.

“Now we have a baby everything’s great. Nobody needs an excuse to avoid sex and if I can’t stand the sight of Tom’s stupid face I can blame it on hormones.”

Booker agreed: “We’ve barely argued since we had the baby. We’re both too tired.

“Sure, one day he’ll stop screaming, or go off to school, or fly the nest and we’ll have to address our issues. Or we could just have another one!”