Mum horrified by internet hoax from 2008

A MUM has reacted with shock and disgust to a photo that everyone else realised was a hoax 12 years ago.

54-year-old Donna Sheridan was horrified after finding a picture of two tourists standing on a skyscraper with a badly photoshopped airliner about to crash into it.

Sheridan said: “I was checking the internet for free offers and randomly clicking on things when a picture came up of this poor couple who hadn’t noticed a Boeing 747 right behind them.

“It’s the worst thing I’ve ever seen. They’re so young and carefree, with no idea of the danger they’re in. You’d think the photographer would warn them, but they were probably getting the focus right.

“What’s awful is that sick people on the internet have copied the photo and added things like King Kong and a shark attacking a helicopter, which doesn’t even make sense.”

Sheridan’s daughter Lucy said: “She was absolutely furious at the Italian government for letting sharks swim in the canals of Venice.

“I’ve tried to get her to check things on Snopes, but now she thinks it’s a news website like the BBC but specialising in conspiracies and sightings of angels.”

Sheridan is currently considering joining the RSPCA after seeing pictures of a cruel new trend to grow miniature kittens in jars.

F**king Teletubbies earning more than you 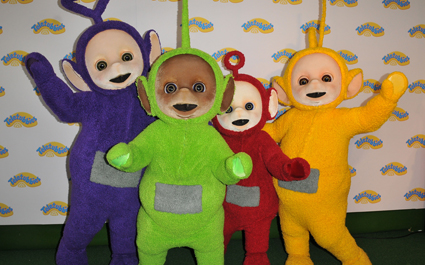 THE bastard Teletubbies earn more than you do, it has emerged.

The gormless idiot baby-monster things, whose job is to amble around making cooing sounds, are pulling in up to £850k each according to BBC figures.

Tinky-Winky in particular has a massive house that is far better than yours, and a sports car with heated seats to warm his fat furry arse.

Butcher Wayne Hayes said: “I chop and mince meat all day, while these fuckers blunder around expressing childlike wonder at their whimsical environment.

“I’d like to see Laa Laa dress a leg of mutton.”

Office worker Nikki Hollis said: “What’s so special about these particular teletubbies? Any teletubby could play those roles.

“If only I was a nightmarish big-eared biped with an aerial on my head.”

However Po is believed to be on a considerably lower salary than his fellow colourful humanoids, which has led to a tense, passive-aggressive atmosphere in the Magic House.