A MIDDLE class family who adore their nanny have not noticed they are paying her and that she is the only ‘family member’ who never loses their shit.

Eleanor Shaw has worked for the Logan family for six years, and slots in with them so perfectly it is almost like she is one of them, except for the fact she never expresses any emotion other than generalised cheerfulness.

Shaw, 29, said: “They don’t seem to have noticed I am an upbeat shell of a woman when I’m in their house because that is my job.

“You’d have to be lobotomised to not want to scream at the seven year old, and the nine year old really gets on my tits some days.

“When I’m tempted to show an incy-wincy bit of my personality, I just take a deep breath and think about all the money I’m earning that I can spend on getting off my face at the weekend.”

Francesca Logan said: “Eleanor is a ray of sunshine in our house. She’s always so happy and patient – we’ve really struck gold with this one.”

Shaw added: “The secret to getting on with people is being on their payroll.” 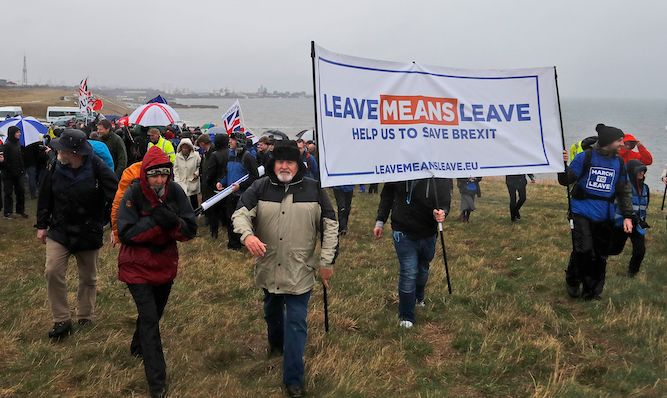 THE Brexit march has reached an imaginary Brexit town where all their dreams about leaving the EU have come true.

‘March to Leave’ has arrived at Brexit-on-Sea where they were hailed as heroes, although some accounts suggest they are merely suffering a mass delusion in a wet lay-by.

Marcher Martin Bishop said: “The way people came out to greet us with nearly-drinkable British champagne was incredible. It’s lucky there was enough for all 17.4 million of us!

“Brexit-on-Sea is a lovely place and definitely not just something we’ve made up in our heads. It’s like an old episode of Coronation Street. What could be more perfect than that?

“The local shops use imperial measures, you won’t hear an Eastern European accent and you can watch the Spitfires from the local RAF base. Look, there go 50 of them now. Magnificent!”

Nigel Farage made a rare appearance to greet his followers, although sceptics say it may just have been a retired local alcoholic in a Barbour jacket stumbling home from the pub.

Paramedic Nikki Hollis said: “Overexerting yourself in bad weather can easily cause delirium. We’re heading over to Brexit-on-Sea now with tea and thermal blankets, if only we could find it on a map.”