A NEW bar will be called ‘Pretentious Shithole’ after the owners realised that is what most people will call it anyway.

The new ‘Pretentious Shithole’ will be opening this weekend in Stevenage with a vast array of stupidly expensive cocktails that will be served out of a tiny blue bucket.

Bar manager, Tom Logan, said: “Our aim is for this to be the most pretentious, twat-filled shithole around so we thought we would just go all out and put it on the front door.

“Our original name was ‘What? That Fucking Shithole’, but we thought that was a bit too meta, so we’re going more mainstream.”

“We dare you to not hate our guts.” 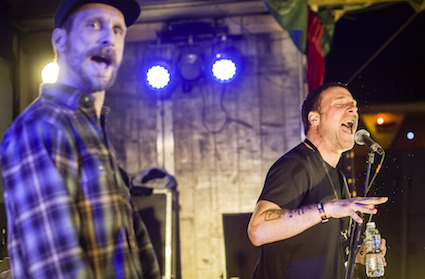 SLEAFORD Mods have taken charge of Britain after staging a coup against the government.

Singer Jason Williamson said: “We’re glad we managed to do it non-violently.

“But that doesn’t mean we wouldn’t have smashed some heads in if we had to.

“I was actually looking forward to slapping Michael Portillo, but sadly he’s not there anymore.”

Williamson added: “So how the fuck does this work?”

Buckingham Palace confirmed the Queen has recognised the new Sleaford Mods government, but also understands if they could not give a shit about her opinion on anything.