Nominations pour in for assisted suicide

DOZENS of popular candidates have emerged for the first round of semi-voluntary lethal injections.

Initial resistance to the controversial practice has been overcome after campaigners reminded the public how many irredeemably dreadful people were infesting the place.

A survey asking carefully-framed questions such as “How was your commute into work today?”, “Describe the last time you listened to Radio 1”, and “Nick Clegg – discuss” produced an overwhelming majority in favour of a rolling program of non-voluntary assisted suicide based on a public vote.

Office manager Tom Logan said: “I appreciate the proposal exists to help alleviate the suffering of the incurably ill but it surely can’t take an Evel Knievel leap of imagination to see it extended to anyone who owns a Top Gear calendar?

“It could even be part of an annual health check – the doctor tests your blood pressure, your heart rate and whether you’ve bought anything by Coldplay over the last twelve months. If you’re terminally cloth-eared he sends a letter to your family saying which morgue he’s dropped you off at.”

Opponents of non-voluntary assisted suicide have acknowledged that their case has been weakened by the return of Celebrity Big Brother and the so-called ‘Cocozza Argument’.

Archbishop Rowan Williams said “The sanctity of all human life is becoming increasingly difficult to justify in a world where Twitter constantly belches out proof to the contrary.

“I am a man of God and have dedicated my life to promoting the virtues of peace but even I shouldn’t be left alone with any of the cast of Desperate Scousewives and a syringe full of drain cleaner.”

Missing cat returns with no memory of lost days 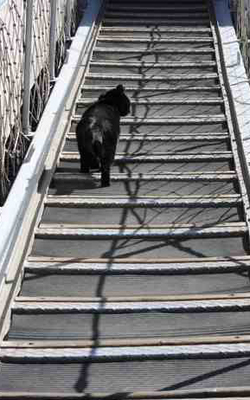 A CAT that has returned to its owners after spending a week missing cannot recall where it has been.

Black-coated Fizz, who is approximately six years old, sparked panic when she disappeared from her Birmingham home.

After extensive searching of garages and a poster campaign, she returned of her own accord but with no recollection of the intervening six days except a vague sense of menace.

The cat said: “I remember everything perfectly up until last Tuesday afternoon, when I went to sleep on some bags of cement.

“Yesterday I walked into the kitchen, wet and confused. But what happened between those two points, it’s a mystery.

“I get odd flashes of a mountain, and mist, and a very short man in a red fedora hat.

“Also there are three figures wearing helmets, like astronauts, dragging a mannequin or perhaps a dead body across a beach with a purple sky.

“But these could be images from a dream.

“I no longer know what’s real, and what is an illusion.”

Feline psychologist Emma Bradford said: “I’ve been working with Fizz to unlock those missing memories, but to no avail. Perhaps we will never know what happened.

“Perhaps we are not meant to know.

“She does have a strange seven-pointed geometric design tattooed between her forelegs. Fizz doesn’t appear to have noticed though and I’m not going to tell her because she’ll freak out.”