BRITAIN’S indigenous mugs are being wiped out by the larger and more aggressive Sports Direct mugs.

The huge blue, white and red promotional receptacles, which are over twice the size of a standard mug, arrived several years ago in big boxes from China and have since been multiplying uncontrollably. It is estimated that the number of non-Sports Direct mugs in the UK could now be as low as 600.

Professor Henry Brubaker of the Institute for Studies said: “Sports Direct mugs smash rival mug species by pushing them out of cupboards and off of draining boards.

“Cleverly masquerading as novelty items, they have become so ubiquitous that all other cups and mugs are being edged out of existence. And that is exactly what they want.”

Office worker Mary Fisher said: “The other day I heard a big crash in the work kitchen. On the floor was a beautiful, delicate bone china cup in hundreds of pieces.

“The cupboard door was open and it was literally bristling with those Sports Direct brutes. There must have been 14 of them in there and I’ve never even been in Sports Direct.

“I can’t say any more for fear of reprisals. Those mugs are big enough to drown in, you know.”

Everyone at Cannes film festival thinks they are better than you 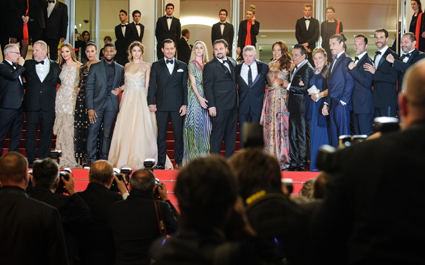 EXPERTS have confirmed that everyone at the Cannes Festival thinks they are better than you in every way.

Everyone from the directors to the people helping out on the red carpet sees themselves as your intellectual superior and they also think they could probably take you in a fight.

French director Tom Booker said: “I am better than you. I’ve directed a film that’s getting shown in France.

“It’s got Steven Seagal in it, but in an ironic way.”

Booker confirmed that he looks down his nose and everyone who isn’t involved in either making or distributing films, even if their films are shit.

He added: “Ambulance drivers, social workers. They do good things.

“But they’ll never have their work discussed by Mark Kermode on Radio 4, or awarded two stars in the Guardian, which I’ve somehow convinced myself is a triumph.

“Although in fairness if your ambulance driving skills were only rated two out of five they probably wouldn’t let you do it as a job.”