Number 36 have a skip out front: your dad's shit local gossip

GIVING your parents the usual cursory weekly phone call? Here’s some of the mind-numbingly tedious local gossip your father will fill you in on.

The neighbours haven’t cut the grass in a while

Your dad has kept an obsessively close eye on the neighbour’s lawn since they moved in in 1996. They haven’t cut the grass for three weeks and dandelions are sprouting, which he says is bringing the cul-de-sac into disrepute and could cause house prices to plummet. Your mum, on the other hand, is convinced they’re dead.

Number 36 have a skip out front

Having a skip in the road is something else that your dad believes will crash the local property market. They look untidy and mean the street will be full of uncouth builders with tattoos and bum cleavage. However, as he confesses a minute later, it does mean he can go out and have an exciting root around in it every evening after dark.

You try to move conversation onto something more meaningful and tell your dad about your relationship problems. He doesn’t give a shit about that though, and is more interested in dissecting number 4’s milk delivery situation. He suspects they might have turned vegan, and says he should have known they were hippy socialist drug smokers because the man wears sandals without socks in the summer.

Your dad has very fixed ideas about what colour houses should be, and that’s brick-coloured or white. The Gervings have painted their house a tasteful and restrained shade of sage green, which actually looks very classy. However, your dad is acting like they’ve daubed ‘F**k you’ across it in massive letters and has written some very passive-aggressive comments about it on the local Facebook group.

The Logans had a few people round the other day

A neighbour had a few extra cars parked outside their house last Saturday and your dad has got a lot to say about the ‘borderline rave’ they hosted. Luckily at this moment your mum takes the phone and confides that he was just jealous not to be invited, but what can you expect when you’ve got a reputation as a nosey curtain-twitcher? 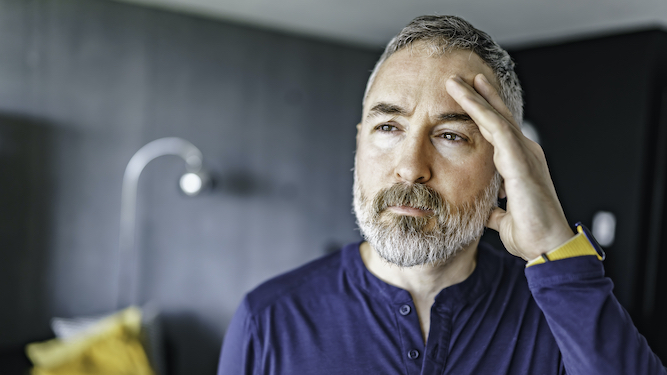 A MAN is facing up to the horrific realisation that he is now the same age his parents were when they seemed alarmingly old.

51-year-old Tom Booker’s world was thrown off kilter thanks to a throwaway remark from his father, saying he was Tom’s age when he had his first hernia.

Booker said: “I have this image of my Dad at the time: a grumpy, balding bastard, always complaining about how tired he was from work and banging on about the pain in his lower back. I told myself I’d never be like that.

“But my wife pointed out that I also moan constantly about being knackered and have recently purchased an executive office chair with integrated lumbar support, which caused me to have the crushing realisation that I have become a miserable old duffer too.

“I’ve been describing my steadily encroaching baldness as ‘premature hair loss’ but I now see that it’s not premature at all. It’s happening at exactly the right time because my hair follicles are dying, like the rest of this deteriorating old carcass I exist within.”

He added: “I’d secretly drink half a bottle of Merlot in the kitchen to calm my nerves, but that would make me feel like I’ve also turned into my Mum.”