AS Christmas menus appear in offices across the country, Britain’s workers are facing up to another festive evening of compulsory enjoyment.

Experts have already warned desperate staff not to even bother devising an excuse, stressing it will suck you in like a black hole full of bastards.

Professor Henry Brubaker, of the Institute for Studies, said: “You’ll claim it’s about the free food. But of course it’s not.

“Even the people you like are still technically ‘work friends’ and therefore impossible to sustain a conversation with for over 45 minutes without resorting to forthcoming holidays or the fascinating patterns in the tablecloth.

“One alternative is to neck the Ukrainian Chardonnay and let your simmering resentments manifest themselves in an explosion of profanity and unreasonably harsh truths. But if you get out of this particular boat, you have to be prepared to go all the way.”

He added: “There is the nuclear option of getting yourself arrested the afternoon before, but that’s a one-off. And you can’t get uninvited. Even if you burst someone’s eyeball with a fork the year before, they are going to ask you again.

“Because no-one must be allowed to miss out. On the fun.”

Mid-level sales drone Tom Logan said: “The menu arrived in my inbox today and now it just sits there staring at me like some coiled viper.”

He added: “Surely, in theory, this vile charade is about maintaining staff morale. But I am the staff. And I do not want to go.

“Fuck this shit. Maybe I can just ring up on the night and say my wife’s been eaten by a wolf.”

“And they give you an old magazine with all the crosswords already filled in. It’s fine.” 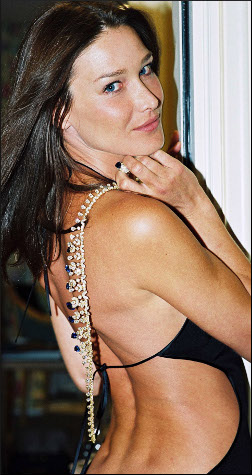 THE Vatican blocked a visit by French first lady Carla Bruni in order to prevent a full-scale Papal engorgement, it has been confirmed.

The wife of French president Nicolas Sarkozy was asked not to accompany him to Rome earlier this month as senior Vatican officials feared that if the Pontiff met her in person there could be lots of coughing, looking the other way and trying desperately to change the subject.

Vatican insiders stressed that while the Pope does wear a long dress, the material is rather flimsy and even a mild erection would quickly have become obvious.

A senior source said: “The Pope prefers not to wear underpants so we have to be very careful about who we let him get close to. The likes of Madonna, Susan Boyle and Hillary Clinton are all fine, while Cherie Blair probably made it shrink.

“But, even though this is an 83 year-old celibate who thinks sex is for rabid monkeys, we are talking about Carla Bruni for Christ’s sake.

“She’s enough to make you give up 14 year-old choristers.”

The source added: “On that basis we felt it would be best if the President came alone. For all his undoubted charms and full head of hair, Monsieur Sarkozy was unlikely to lead to a Pontifical erection. Not after lunch anyway.”

Papal historian Julian Cook, said: “The last time there was a full-blown hard-on in the Vatican was when John Paul II met Nancy Reagan.