HUMANS are reacting to everything in wildly exaggerated ways.

Experts at the Institute for Studies found that people are no longer capable of reacting to an event or piece of information without flying into hysterics.

Professor Henry Brubaker said: “Everyone is constantly freaking out. For example, lunch at a generic chain restaurant will be described as the ‘best/worst meal I’ve ever had in my entire life’.

“Someone who goes out to buy coffee is a ‘hero’. Whereas misplacing one’s hat is ‘literally the biggest nightmare’.

“It’s more annoying than anything that happened before time existed, when reality was just an unfathomable void.”

31-year-old Mary Fisher said: “I think it’s social media turning everyone’s lives into a soap opera. So there have to be relentless thrills and spills or the audience loses interest.

“Even going to the pub is an exhausting emotional rollercoaster with joy and tears.

“But then crazy stuff keeps happening, like this biscuit I’m eating, it’s a goddamn flavour sensation. Oh my God it is the stuff of legend.

“A hero biscuit legend. All hail the biscuit!” 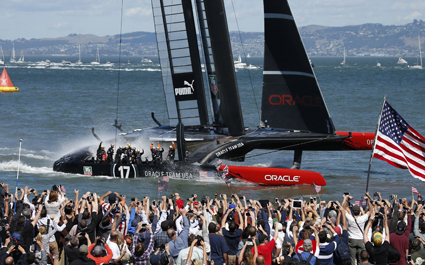 A MASSIVE boat with an enormous sail has beaten a bunch of other boats to win the America’s Cup, the world’s top boaty prize.

The boat apparently won by spending most of its time barely touching the water, leading observers to wonder if it may actually be a plane.

Oracle, as the boat is called, said: “I’m very proud to have won and am glad no credit is being given to the idiots on my back.

“I now plan to relax, stop being a boat and spend my winnings on opening a whiskey bar in Tokyo.”