Parents braced for ill-fated days out

WITH half term looming, Britain’s parents are steeling themselves for day trips that inevitably will end with at least one child weeping uncontrollably.

Wildlife sanctuaries, theme parks and heartbreakingly sad ‘farm parks’ are the top destinations for doomed family outings, according to research by the Institute for Studies.

Parent Nikki Hollis said: “I’m taking my children and two of their most hyperactive friends to a desperately sad former working farm recently converted, on a budget of 58p, into ‘Llamaville Adventure Land’.

“The day out will of course be curtailed by a tearful disagreement over who has the strawberry lolly, or some similar fucking thing.

She continued: “Hopefully we will at least get a chance to look at the llamas standing forlornly in the rain, touch a mummified duck’s wing in the visitor centre and buy a llama-shaped pencil sharpener before the tears start.

Mother-of-two Emma Bradford has prepared a trip to a falconry centre: “Basically I’m driving for three hours with two children and a husband to visit a medium-security bird prison staffed by alcoholic former stage actors dressed as Tudor noblemen.

“Clearly there’s a limit to how good this can be, but I just pray I don’t end up shouting ‘I’m never taking you anywhere again until you’re at least 32’ at my ill-behaved offspring, while strangers stare at me and mutter darkly about Childline.

“It’s about fifty fifty I reckon.”

Lohan imprisonment to be shown on adult channel 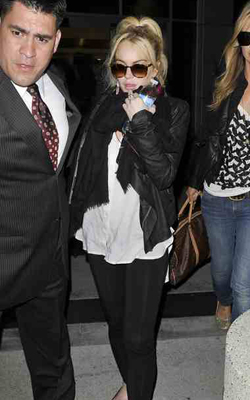 ONANISTS around the world will be able to watch Lindsay Lohan’s time in remand via $5-per-minute TV, a court has ruled.

Everybody’s favourite Dead Pool wild card will be asked to take 58 showers a day during her time in the remand centre, while changing attractive cellmates every ten minutes in a bid to keep viewers interested.

Wayne Hayes, a hunched, bleary-eyed Lohan fan from Carlisle said: “We should look into whether Jenna Jameson or any of The Saturdays has breached bail conditions recently, and get them banged up with Lindsey.”

“Okay, I’m going to need a few minutes to myself after using the phrase ‘banged up’.”

He added: “I also like the idea of getting Gillian Taylforth in as the cruel S & M-obsessed gang leader running the wing. Is she in the penal system presently?”

The star of Mean Girls and that photo where you can sort of see one of her nipples requested that the court allow her incarceration to be filmed to help raise funds for her almost-daily bail bonds, court fees and phenomenal amounts of whatever gets her through the day.

If freed, Lohan is expected to use part of the monies raised to pay her lawyers in advance for the next time she wraps her car around a policeman at 80mph whilst under the illusion she’s hosting the Emmy awards.

Hayes said: “There’s an assumption that, because you’re famous and did a film once, you have pots of money but when you’re as prodigiously and litigiously narcotic as Lindsey, the fee for Herbie Fully Loaded can only last so long.

“It’s tragic that such a clearly talented young actress should have fallen so far. But my empathy won’t be enough to stop me fapping like priapic gibbon at the sight of her handcuffed by a butch female prison warder.”