Parking At Work Now Hardest Part Of Most Jobs

FINDING a parking space is the most challenging aspect of the average working week, according to a new survey.

Research found that locating a spot in the office car park that wasn’t already occupied by a car, a bit of a car or an ‘unexplained’ traffic cone, was 86% more emotionally and intellectually draining than the subsequent eight hours of staring.

Tom Logan, from Reading University, said: “The shortage of spaces at any given workplace means at least half the workforce is experiencing what’s known as ‘Titanic syndrome’.

“It’s the angry, panicked feeling of watching the last lifeboat disappear over the horizon with Billy Zane in it quaffing champagne, as you watch helplessly from the sinking deck, contemplating your total fuckedness.

“Except instead of freezing to death in the bottomless icy water, you have to go and park in the estate round the corner, where there’s a four in four chance of your wing mirrors getting kicked off by a shit. And you’ll be slightly late.”

He added: “We also found that you were absolutely right about the ‘unexplained’ cone. It is placed there every night by some fucker who works in accounts and keeps it in his boot during the day.”

Data entry clerk, Emma Bradford, said: “I just sleep in my car. I suppose I could leave the car and walk to a hostel, but it might get towed and crushed with me still in it, or worse I might get a note on the windscreen that’s been printed out so that I know they mean business.”

Sales manager, Roy Hobbs, said: “Not getting a space is wretched, but worse still is walking out of the office on a Friday to find some murdering Nazi bastard has blocked you in. You should be able to kill them and then impale their head on a car aerial.

“Richard Branson lets his staff do that.”

Junkies To Be Renamed 'Heroin Buffs' 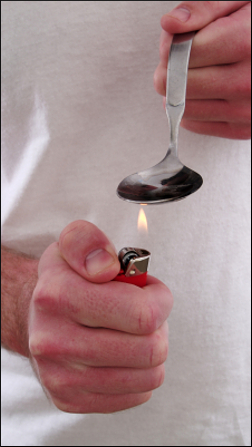 DRUG abusers are to be renamed ‘heroin buffs’ in recognition of their in-depth knowledge and appreciation of the world’s finest narcotics.

The UK Drug Policy Commission said terms like ‘junkie’ and ‘addict’ stigmatise decent, productive members of society who live ankle deep in vomit and would stab you right in the head for 50 pence.

Deputy director, Julian Cook, said: “In the same way that Dan Snow is a history buff or Rick Stein is really into haddock, can we not also apply the mantel of buff to someone who has taken the time and effort to develop a connoisseur’s palate for opium derivatives?

“We should acknowledge the intellectual commitment and passion of those have decided to live in a cesspit, eat nothing but their own scabs and inject themselves eight times a day with a needle they found stuck up a dead rat.”

He added: “I recently met an expert who could not only distinguish between Afghan and Burmese heroin, but could tell you when it was harvested, who mixed it with Vim and how many heads the local warlord had hacked off that year.

“But where’s his six-part series on BBC4?”

Stephen Malley, a crack aficionado from Hatfield  said: “I’ve been building up my collection of antique pipes for 20 years. This one was hand made in 1867 by Martin Van Hegelen, one of the finest glass blowers in Rotterdam. It’s really quite exquisite and gets me totally fucking mental bastard off my tits.

“By the way, if I throw up blood on you, please do forgive me but I’m researching an article on some fucked-up Cambodian shit for the London Review of Smack.”

Wayne Hayes, who lives in Stephen Malley’s bath, added: “I am hoping to complete my Master of Heroin exams later this year and then take up a fellowship at the Doherty Institute in Kandahar.

“Or I might just keep filling this bath with piss.”