People using the phrase 'Platty Joobs', and other reasons to start drinking this morning

WE’VE got four days of Queen-based nonsense to get through, so you’d better crack open a bottle immediately. Here are the horrors it will help you blot out.

Is the phrase ‘Platty Joobs’ childish and annoying in the manner of ‘holibobs’ and ‘Panny D’, or an irreverent bit of British humour that undercuts the obsequious fawning of the celebrations? Something to discuss while you’re pulling the tab on your first can of lager this morning.

The gay couple next door are drinking a cocktail called the ‘Lam-Queen-i’ under some ironic Union Jack bunting. This has encouraged number 47 to put out the England flag and World War I soldier silhouette they’ve got for Remembrance Day. Now your weird neighbour Norman has stuck a swastika in his window. The worst thing is it all makes a bizarre kind of sense and you need to be drunk to cope with this reality.

The forecast for Saturday isn’t looking good, which means you’ll have to drink in the house rather than the garden. You’ll pop on the telly and be confronted with a concert featuring a less-than-stellar line-up including Craig David, Duran Duran and Queen. You’d better sink another bottle of wine to alleviate the misery.

By the time Sunday rolls around you’re considering having a day off the booze to recuperate and nurse your monstrous hangover. However, when you find yourself watching a section of the pageant called ‘Dames in Jags’ – literally Dames being driven around in Jaguars – you’ll be reaching for a bottle of gin to help blank out the sheer embarrassment of being British.

After four days of state-approved drinking, you will feel like absolute shit and be dreading the return to work. So you might as well make the misery worth it by getting as drunk as humanly possible, starting from right now.

How to not get involved when a couple are rowing 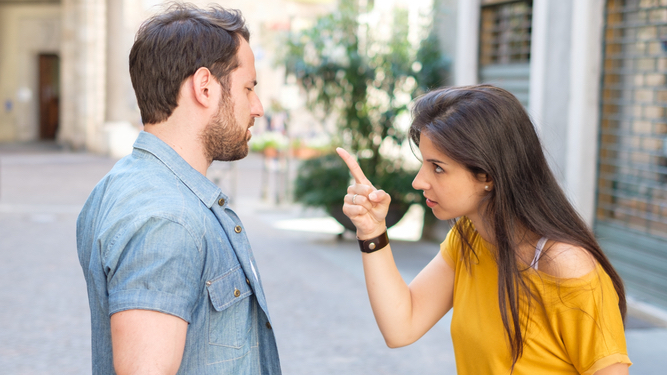 A COUPLE having a blazing row should be given the privacy of only being observed discreetly, however entertaining it is. Don’t be tempted to do the following.

Resist the urge to cheer or boo

They probably won’t appreciate every comment or insult being applauded or derided by a smug bystander. Treating a serious problem in their relationship as a pantomime performed for your entertainment will make them stare daggers at you and even threaten violence. Oh yes it will.

There are rights and wrongs to every argument, but don’t hang around so long you’re passionately supporting one side over the other. Particularly if you’re with a partner, who may find it distasteful and weird, thus spreading the argument to you. And let’s face it, you haven’t won one yet, so don’t tempt fate.

Resist the urge to use score cards

It may seem hilarious to scribble scores on a bit of paper and hold them up like a Strictly judge, but a couple about to angrily break up after a five-year relationship may not share your wacky sense of fun. Also don’t film it on your phone for your own version of VAR when you get in.

Absolutely do not offer advice

Strangely, arguing couples do not take kindly to advice from a condescending passerby. ‘You really need to take five’ and ‘People say things they don’t mean in the heat of the moment’ are actually good advice, but the idiots won’t listen because it’s somehow ‘not your business’. And admittedly it’s not that relevant to a mega-serious argument, eg. he’s emptied their bank account to pay for prostitutes.

You might be quite a crowdpleaser down the local pub with your passable takes of Chris Eubank and Russell Brand, but mimicking a couple in the middle of a white-hot furious exchange may temporarily end your career as an impersonator due to severe facial bruising. That’s the last time you kindly take an interest in people’s problems.