THOUSANDS of people under 35 are rejoicing at the demise of a woman they once read about. Following Lady Thatcher’s death, people who want to look impressively ‘political’ are acting like they remember Thatcher as something other than a vague abstract concept of evil.

Guardian website regular Tom Booker said: “Thatcher is dead! This is the best day of my life.

“I was really against everything she stood for, whatever that was.

“Especially her ‘prole tax’. She actually invented the word prole, the old bitch.”

28-year-old Facebook self-promoter Nikki Hollis wrote: “Mrs T dead at last. Horrible woman, although I feel sorry for Mr T he was ace in The A Team.”

19-year-old student Stephen Malley said: “The worst thing about Mrs Thatcher was her lack of humanity, empathy or emotion.

“That’s why it’s great that she’s succumbed to dementia after what would have been a long, frustrating and humiliating illness of the type commonly affecting elderly people. The fucking old cow.” 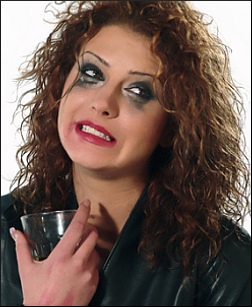 EVERYONE in Britain north of Birmingham is already very drunk indeed. ‘It’s a release is what it is’

Eyewitnesses said the drinking started within seconds of the announcement and was of a ferocious intensity.

Police in Manchester, Newcastle, Liverpool and Glasgow have been told to take the rest of the week off as local authorities said they will tidy everything up ‘at some point’.

Nathan Muir, a southerner visiting Derby on what passes for business in the midlands, said: “I was in a meeting when someone spotted the news on their smartphone. The booze appeared instantly. I have no idea where it came from. It was like they had been waiting a very long time and were fully prepared.

“I would say they were all aggressively drunk within four to five minutes. I think it was the adrenalin rush, combined with the funnels.

“Anyway, I quickly felt as if I did not belong, particularly when a half empty vodka bottle whizzed past my head, before exploding against the Derby Enterprise Zone poster on the wall.”

He added: “As I made a dash for the car park, I was almost killed as a desk smashed through a second floor window and completely destroyed a Nissan Qashqai.

“Then this woman stuck her head out of the broken window and shouted, ‘lets find Tebbit and piss on his face’.”

A spokesman for Merseyside Fire Brigade said: “We’re going to let things burn. If we put it out they will just set fire to it again. Plus, we don’t want to seem like killjoys.”