THE Royal Society for the Protection of Birds has admitted that pigeons are a rough bunch of bastards who bring the other birds down.

The charity, which enjoys a largely affluent membership who like going out to see nuthatches, chaffinches and spotted flycatchers at weekend, has confessed that pigeons are ruining it for everyone.

Spokesman and twitcher Denys Finch Hatton said:  “We’ve held an unofficial ranking of birds based on their perceived economic and social status for decades, and pigeons are right at the bottom.

“Peacocks are obviously upper-class, strolling around manors disdainfully. Most of your common garden birds are middle-class and like a big garden and a hanging basket. Magpies are lower-middle, but aspiring.

“When it comes to seagulls, it really comes down to whether they’re from Grimsby or Salcombe. But pigeons are the long-term benefit claimants of the bird world. Absolute scum.”

“Though my cousin Pete’s always pecking at discarded sourdough out front of an organic bakery in Islington. Thinks he’s better than us.”

16 tweets Trump would have sent this weekend if he could 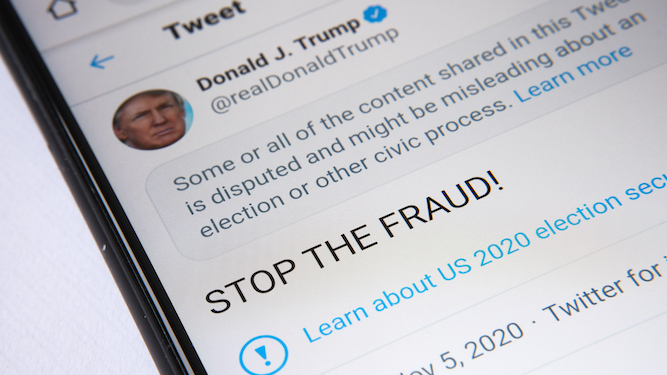 DONALD Trump’s Twitter account was deleted this weekend, which he considers the worst outrage of the last seven days. Here’s what he would have tweeted if he could:

I told the Protestors that they were Special and I Loved them, something I have never even said to my own four children, and the FAKE NEWS media make this out as a bad thing. Sad!

American VOTERS who did not take part in the protests should be Ashamed. Our great Courts, including the Supreme Court who owe me, will deal with them. MINIMUM TEN YEARS IN PRISON

I WON THE ELECTION!!

I won the Election in a landslide! Specifically I took California, New York, Washington DC, Puerto Rico, and all swing states. 80 million votes discovered in drawer in Pelosi’s office by @BasedMAGA1776 on Wednesday. Subsequently lost again.

So many fine people have told me that this Nation must be set aflame if the right decisions are not made in Congress. Stand Back & Stand By! Armageddon!

The weekend daytime lineup on Fox News is terrible! Lifeless and no support for Trump. 1pm-3pm need a shake-up of format & presenters with a stock market puppet character. Listen to your President!

DEMOCRACY MUST BE DESTROYED! MAGA

Likewise the weekend Radio 1 presenters are a poor line-up. Jordan North may have won The Jungle but what happened to Maya Jama, who brought a breezy lite feel to mornings? And what about Vernon Kay? He Needs the work!

Everyone who broke into the Capitol will be given a full Trump lifetime pardon, also covering next week’s inauguration which Patriots should attend. Antifa, who led the law-breaking charge, will be charged with Sedition and shot at dawn!

TAKE YOUR GUNS & TAKE TO THE STREETS!!!

Republicans gather in New York at One Trade Centre at 2pm tomorrow to protest that Vogue has not given my beautiful wife Melania, or even more beautiful daughter Ivanka, the Cover. Bring flex-cuffs!

The Pandemic is over. All State lockdowns in the United States, this beautiful country of ours, and I have been the greatest president, will end tomorrow and we are all free as we should Be. I thank you for my re-election.