SUCCESSFUL interrogation only requires the bad cop, it has emerged.

The Institute for Studies researched the globally-recognised ‘good cop, bad cop’ routine to find that simply having the incredibly hostile cop yielded the same results.

“Actually criminals saw through that tactic in about 1973.”

Career criminal Roy Hobbs said: “I don’t even like the good cop.

“Frankly his suggestions that we might be able to ‘work something out’ if I confess to a series of armed robberies are an insult to my intelligence.

“No, my attention is fully focused on the other one, the bad one, who’s just smashed a chair up and is now threatening to pulverise my head with one of the broken off legs.

“When the bad cop’s all drooling and saying things like ‘it was scum like you who killed my wife’, that’s when I know it’s game over.”

Gang boss agreed Julian Cook said: “I think I speak for all criminals when I say the cop who’s prepared to beat you to a bloody pulp is the one you’re eager to please.

“His partner who’s just bought you a Diet Coke and is asking if you like Mumford & Sons is just a dick really.” 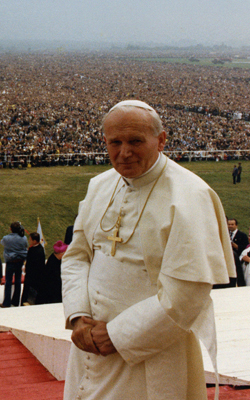 THE former Pope’s mystery-shrouded miracle was completing an impossible computer game in the 80s, it has emerged.

A Vatican spokesman said: “Anyone who remembers the popular platform game Jet Set Willy knows that it was impossible.

“Not only was the collision detection a bitch, but there was a bug that meant if you went in a certain room you instantly died.

“But in 1985 John Paul II locked himself in his chambers for 4 days without meal breaks, emerging to say ‘Ive nailed it’.”

Catholic former Spectrum owner Stephen Malley said: “Jet Set Willy was ridiculously hard. When I think about how many times the former Pope must have died and gone back to the start, rather like Christ himself, it is quite inspiring.

“But to justify a sainthood I’d also want the Pope to have completed its prequel Manic Miner, which didn’t have as many rooms but was still very frustrating.”

He added: “Without pokes too, if anyone remembers what a poke is.”