A MAN keeps telling people they should put aside their differences over Brexit like he is Gandhi or something, it has emerged.

Teacher Martin Bishop likes to imply he is wise and above petty tribalism, but actually just wants to feel superior without getting into any arguments.

Bishop said: “We all need to move on from the referendum and stand together to overcome the challenges ahead. I’ll explain in detail how that will work in practice some other time.

“Britain must not become divided by hate as it was during the civil war, although to be honest most Remainers just seem quite annoyed and most Brexiters don’t seem to care what they voted for.

“Even so we need to learn from the great peacemakers in history. People like Gandhi, Martin Luther King, Nelson Mandela and me.”

Colleague Emma Bradford said: “Martin says we should respect each other’s opinions, but that’s difficult when my gran voted on the basis of her irrational fear of Asian doctors.

“However I do agree with my nan that Martin is an arse.”

When can I stop being a wanker? asks weary Ramsay 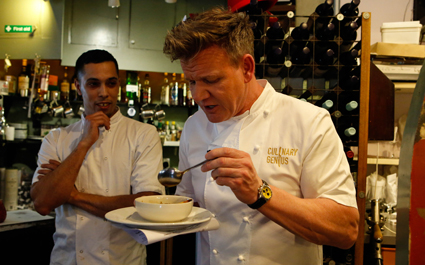 GORDON Ramsay has asked when he will be allowed to drop his ‘tough guy wanker’ persona, it has emerged.

The celebrity chef is sure he has earned enough money by now to stop behaving like an unconvincing psychopath in order to entertain TV viewers.

Ramsay said: “I’ve started to think it’s a bit ridiculous to act like a US Marine Corps sergeant when all you’re doing is making a souffle.

“Yesterday the kettle was taking ages to boil so I automatically started screaming, ‘YOU NEED A FUCKING ROCKET UP YOUR ARSE, YOU LAZY METAL BASTARD!’

“I called a meeting with my people and asked if I could stop being angry, but they said that would jeopardise my new Fox show, Ramsay’s Baking Fury.

“I told them my idea for a show called Gordon’s Calm & Well-Adjusted Cookery Programme, but they said it would ‘damage the brand’.”

Agent Donna Sheridan said: “I explained to Gordon that if he’s not constantly kicking off there’s no way people will tune in to something as tedious as a middle-aged man slicing a courgette.